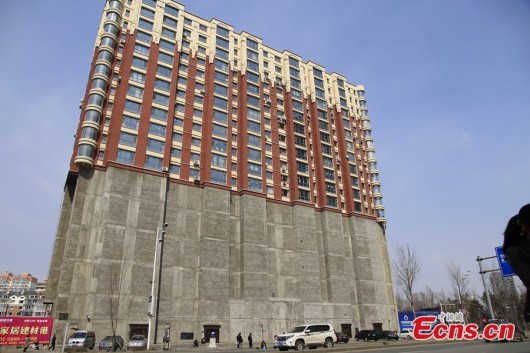 Via Ecns.cn: “Photo taken on April 1, 2014 shows a 17-storey residential building, with the first five floors all concrete walls in four sides, at Changchun Road of Jilin city in northeast China’s Jilin province.”

Merkel! “On March 28, German Chancellor Angela Merkel hosted visiting Chinese President Xi Jinping at a dinner where they exchanged gifts. Merkel presented to Xi a 1735 map of China made by prolific French cartographer Jean-Baptiste Bourguignon d’Anville and printed by a German publishing house. According to an antique-maps website, d’Anville’s map was based on earlier geographical surveys done by Jesuit missionaries in China and represented the “summation of European knowledge on China in the 18th-century.” The map showed, according to its original Latin caption, the so-called ‘China Proper’ — that is, the Chinese heartland mostly populated by ethnic Han people, without Tibet, Xinjiang, Mongolia, or Manchuria. The islands of Taiwan and Hainan — the latter clearly part of modern China, the former very much disputed — are shown with a different color border.” (Tea Leaf Nation)

Sino-Malaysian relations worsen. “A kidnap-for-ransom gang based in the southern Philippines is suspected of seizing a Chinese tourist and a receptionist from a dive resort in eastern Malaysia, authorities said Thursday. // The kidnapping late Wednesday underscored the persistent security threats in Sabah state, a popular tourist destination a short boat ride from the southern Philippines, which has long been home to a dangerous mix of Muslim militants and kidnap gangs.” (AP)

Quite common Weibo reaction to Chinese tourist kidnapped in Malaysia: Why the hell did you go there? You deserve it! http://t.co/8geUcRPdvQ

Common reaction to criticism of kidnapped tourist:, see comments – Have you ever left your village you bumpkin http://t.co/8geUcRPdvQ

Efficient vs. inefficient corruption. “Through its 30-plus years of economic modernization, China has seemed to stick to efficient levels of corruption. Connected families got very rich, but most families did better than they had before. // An increasingly important question for Xi Jinping’s time in office, which bears on the even more urgent question of whether China can make progress against its environmental catastrophe, involves the levels and forms of Chinese corruption. Has it begun passing from tolerable to intolerable levels?” (James Fallows, The Atlantic)

Maoming protests condemned. “The Maoming government has called the unauthorised protest ‘a serious offence’ and urged residents to ‘trust the government and not give illegal elements the opportunity to cause chaos.’” (BBC)

And punishment. “Authorities in Maoming city on the southern coast of Guangdong province have held a press conference on the protests over controversial plans for a local chemical plant. Police say they have punished 44 people and detained 18 others for violence during the three days of protests. // On Sunday, more than 1,000 people demonstrated in front of Maoming’s government building. Protesters smashed office windows and billboards in a display of anger over plans to produce PX, a petrochemical substance used in plastic.” (CNTV)

Good profile on Matt Beyer, “China’s first and only officially licensed foreign sports agent”: Mental toughness isn’t just about dealing with epic road trips and mediocre refs. It’s about understanding how hierarchy works in an entirely different context. For agents like Beyer, it’s about finding players who are self-aware about their career trajectories. Because contracts are usually renegotiated yearly, an agent’s driving goal is rarely to find players capable of scoring their way into the NBA. Beyer is interested in finding players with enough experience to recognize the long-term benefits of being a star in the CBA. ‘What we’re trying to do is create another Stephon,’ he says. ‘Don’t want to get a guy who’s too old. But also can’t get a guy who’s too green and needs babysitting all the time.’” (Hua Hsu, Grantland)

Poor Hu Xijin. “A professor at the Chinese University of Hong Kong (CUHK) on Tuesday took off his shoes and walked out in the middle of a speech by Hu Xijin, editor-in-chief of the Global Times, according to takunpao.com, citing Mingpao Daily.” (Ecns.cn)

“Fire Guts Restaurants Across from Houhai.” (the Beijinger)

“Everything you need to know about the Wen Zhang scandal.” (The Nanfang) 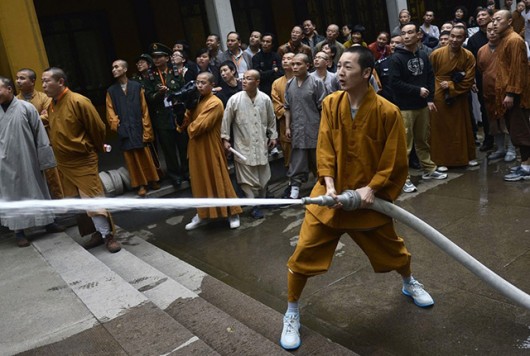