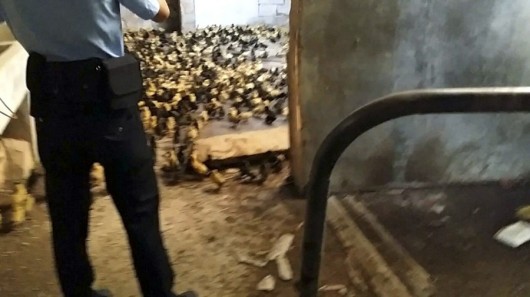 1,130 ducklings released in money dispute, via NetEase via Chris Buckley

Another week’s over links.

Springtime in Beijing means catkins galore. “The white stuff is actually ‘catkins’—petal-less flowers that come from poplar and willow trees. In the 1960s, Beijing wanted to turn its city green, so the government decided to plant millions of trees, including many poplars and willows. The only problem? When planting the trees, officials didn’t pay attention to the sexes; both poplar and willow tree populations have far more female than males trees—up to a 7-to-3 ratio or more (in Chinese).” (WSJ)

Disturbing. “One high school student was killed and another two seriously wounded in a knife attack in Shaanxi Province on Tuesday, Shaanxi police said today. // The incident occurred in Guanmiao Town of Ankang City when more than 10 knife-wielding men attacked the Guanmiao High School students, who were on their way home from school. // ‘The attackers were strangers,’ said Yin Yixian, a school official. ‘They ran towards the students and chopped them down.’” (Shanghai Daily)

Aw, no more slash fiction. “Every now and then, the Chinese government would declare war on the spread of porn on the Internet. They never succeeded, but they fight on nevertheless. Last Sunday, China launched yet another online raid, and this time it has a fancier name ‘Cleaning the Web 2014.’ // The campaign is aimed to ‘create a healthy cyberspace’ by doing ‘thorough checks on websites, search engines and mobile application stores, Internet TV USB sticks, and set-top boxes’ for pornography.  But one particular form of sexually explicit content seems to have received special attention from authorities – slash fiction.” (Offbeat China)

Where Beijing’s pollution comes from. “About a third of the air pollution in China’s smog-hit capital comes from outside the city, official media reported on Wednesday, citing a pollution watchdog. // Chen Tian, chief of the Beijing Environmental Protection Bureau, said that about 28-36 percent of hazardous airborne particles known as PM2.5 came from surrounding provinces like Hebei, home to seven of China’s 10 most polluted cities in 2013, according to official data.” (Reuters)

Changes abound at NLGX. “Starting at the end of February, a rectification project on Nanluoguxiang was initiated, and unlicensed shops have been shut down. Most of the closed 61 shops were low-end snack shops, the Beijing Evening News reported.” (Global Times)

Poor guy probably never saw it coming. “For a year, the chairman of one of China’s biggest state corporations, China Resources, seemed immune to allegations that he had embroiled the company in corruption. That was until a reporter went public with the additional accusation that the chairman, Song Lin, kept a mistress who laundered his money. // On Thursday, the Chinese Communist Party’s agency for investigating corruption by officials, including managers of state-controlled companies, abruptly ended Mr. Song’s career, for now at least. He became the latest instance of a powerful party functionary brought down after accusations featuring illicit riches, extramarital sex and pictures taken in a bedroom.” (Sinosphere)

Who wants wine? “Legendary former Manchester United manager Alex Ferguson is to auction off part of his wine collection worth an estimated £3 million ($5 million, 3.6 million euros), Christie’s announced on Wednesday. // The collection of around 5,000 bottles contains many fine and rare wines including Domaine de la Romanee-Conti Burgundies and Finest First Growth Bordeaux ranging from the 1986 to 2011 vintages.” (AFP)

Tainted noodes. “Earlier this week Kunming police discovered a small group of illegal factories southwest of the city suspected of having produced hundreds of tons of tainted noodles over the past six months. Two men thought to be in charge of production have been arrested and the facilities cordoned off pending an ongoing investigation.” (GoKunming)

Everything tainted. “A nationwide investigation has shown that as much as 16 percent of China’s soil contains higher-than-permitted levels of pollution, the environment ministry said on Thursday.” (Reuters)

Stay for the ending of Nick Compton’s story about baijiu, baby. (the Anthill)

“Amid spreading prosperity, a generation of self-styled also-rans emerges.” (The Economist)

“Detained celebrity blogger Xue Charles Bi-Chuen has been bailed because he is suffering from a ‘serious illness,’ Beijing police said on Wednesday.” (Xinhua)

“Cantonese speakers the most susceptible to nose and throat cancer.” (The Nanfang)

Man marries two women at same time in Ningbo? (The World of Chinese)

“Demolition begins on hidden forest house in Guangzhou.” (The Nanfang)