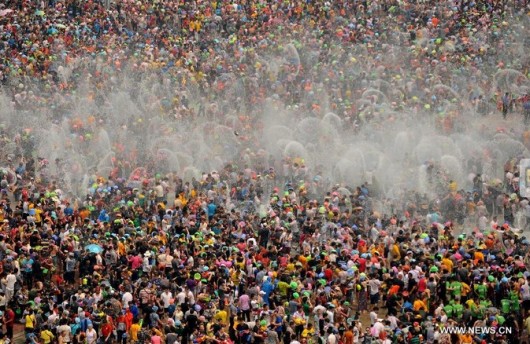 Via Xinhua: “Tens of thousands of locals and tourists have fun with water during the Water-splashing Festival in Jinghong City of Dai Autonomous Prefecture of Xishuangbanna, southwest China’s Yunnan Province, April 15, 2014.”

Links! Meanwhile, I’ve folded sobriety into a bundle and won’t see it again till the morning. Likely drunk on rum thanks to the Anthill and Cu Ju‘s Writers and Rum event, a Creamcast of which will be posted in time.

Tribute? “The direction of China’s current reform is consistent with the notion of late Party chief Hu Yaobang, said political analysts on the 25th anniversary of the death of the reformist leader, which fell Tuesday. // Hu was elected as general secretary of the Communist Party of China (CPC) Central Committee in February 1980, and he resigned in 1987. He died on April 15, 1989 at the age of 74. // On Tuesday, Net users posted online messages of tribute hailing his push for reform and for building a clean government.” (Global Times)

Takeout piece on Beijing Guoan: “Apart from its name—the “Workers’ Stadium”—and the socialist realist statue outside the entrance, Beijing Guoan’s home ground shows no signs that it was first erected at the height of the Maoist era in 1959. Today the renovated stadium is ringed with slick bars and clubs; posters advertise an upcoming Bruno Mars concert.” (Roads and Kingdoms http://roadsandkingdoms.com/2014/beijings-green-army/)

Toxic spill, what me worry? “A freighter loaded with shipping containers collided with a sand barge at 2am on the morning of April 13 on the south side of Humen Bridge in Dongguan, iFeng reports. As a result of the collision, toluene diisocyanate (TDI) was spilled across the deck of the ship.” (The Nanfang)

Classic movie returned. “In a gesture that could help ease relations between Norway and China, strained since the awarding of the 2010 Nobel Peace Prize to the imprisoned democracy advocate Liu Xiaobo, the National Library of Norway has returned a long-lost Chinese silent film. // A print of ‘The Cave of the Silken Web,’ released in 1927 during a vibrant era in Chinese filmmaking, was discovered in the library’s archives in 2011. It is believed to be the only existing copy of the film, which was directed by Dan Duyu and is based on an episode from the Chinese classic novel ‘Journey to the West.’” (Sinosphere)

Beijing! “Beijing has made it into the top 10 of the world’s most global cities for the first time, ranking eighth in the A.T. Kearney Global Cities Index.” (China Daily)

Good luck. “The launch of a renewed campaign against pornography on the Internet was announced on Sunday. Despite multiple previous campaigns, the spread of pornography online persists. Some websites continue to produce and spread pornography in the name of sex education, some do it as part of their marketing strategy to gain a higher click-through rate, and still others make online games and fill their product with obscene and vulgar content. Many telecom operators, web portals, as well as search engines and mobile application stores have turned a blind eye to the phenomenon and have thus opened the door to the spread of pornography.” (China Daily)

Graft. “A senior government official in China’s Sichuan province is under investigation for ‘severe discipline violations,’ which is often a euphemism for corruption, state media said. // Zhao Miao, a senior official in Chengdu, capital of the southwestern province of Sichuan, was taken away on Thursday for questioning by anti-corruption investigators, the Xinhua news agency said late on Saturday.” (Reuters)

Shenzhen train station knife attack. “At around 8am on April 13, a woman walking into Entrance A of Shenzhen North Railway Station was stabbed in the abdomen by a man wielding a knife, who would later turn the blade upon himself, Nandu reported. Named Zhang, the man was despondent that the victim, his wife, was transferring to Shanghai to work for two months, said a source belonging to the woman’s family. The woman had been working at Foxconn and was the sole breadwinner for the family that includes their seven year-old son.” (The Nanfang)

Remembering A Forgotten Tiananmen. Uncovering a forgotten crackdown in Chengdu http://t.co/qSGI0oI6O8 Via @nprnews

“In praise of the Mandarin bum.” (Kevin McGeary, The Nanfang)

“What Makes a Tier-2 City in China? Count the Starbucks.” (WSJ)

“Chinese father sacrifices HIMSELF to save his son as he pushes him out of the way of a lorry shortly before it ran him over.” (Daily Mail)

Go tell these people which city is the best for expats. (YouGov)

Via Isidor’s Fugue, “underneath the Zhanjiang Bay Bridge at night”: 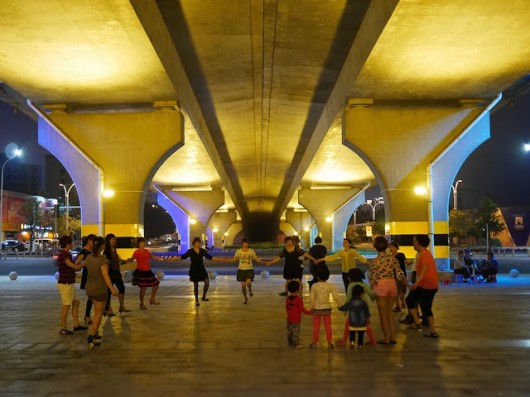 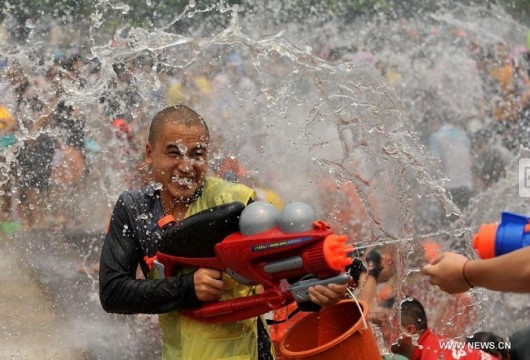