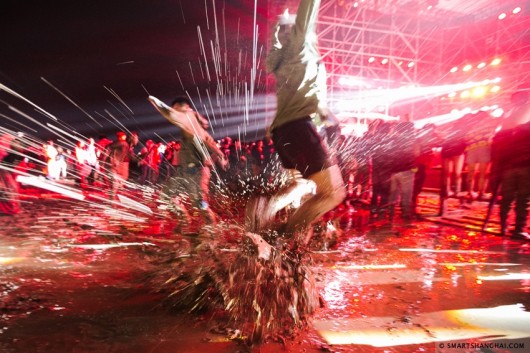 I’m sure you’re all ready to party and all, since it’s a holiday eve, and music festivals and links.

Big brawl in Guangzhou. “Reports of a shooting on Beijing Road and Huifu Road, a busy shopping area, are not rumors. A fight broke out on Monday afternoon after two groups of people allegedly started fighting over a shop’s decorations of all things. Apparently someone didn’t like them and an argument, followed by a brawl with knives, ensued.” (City Weekend)

Xi Jinping visits Xinjiang. “’More sweat in ordinary times, so there will be less blood spilled in times of war,’ Mr. Xi told police officers in Kashgar, a city in southwest Xinjiang, an area beset by particularly volatile tensions between Uighurs and the Chinese authorities. ‘There must be effective means to deal with violent terrorist elements.’” (Sinosphere)

Real vs. satire. “The country has 20 cities as big as Los Angeles, nearly 50 as large as my hometown of Philadelphia! Kathleen and I spent time in the resort town of Hangzhou, China’s version of Lake George up in New York. Even it had six and a half million people.” (Chris Matthews, MSNBC)

“Firstly, they got a lotta people. Now, I’m not talking the crowd at Yankee Stadium here. I’m talking millions! Over a billion, even. And they all live in these cities. I got lost in this one town called Shanghai, and thought I’d ended up in Europe. When our waiter told me I still in China, Kathleen says you shoulda seen my face!” (Chris Matthews, China Daily Show)

That escalated fast. “An editorial in China’s state-run Global Times today lambastes Hongkongers who protested against a mainland toddler urinating in the street, comparing them to ‘skinheads’ and ‘neo-Nazis.’” (SCMP)

Yes, those damn noisy grandmas. “To lessen the disturbance caused by public dances by the elderly, scientists from Shanghai’s Fudan University have invented a hi-tech speaker that can reportedly blast sound to targeted areas without being heard elsewhere. // This can be a useful compromise between the dozens or sometimes hundreds of dancing elderly who want to play loud music for theirguangchangwu (group dance) exercise at public squares and angry residents who are disturbed by the morning or late-night noise.” (SCMP)

Why directed at expats? “Expats looking to hire an ayi can head along to the first domestic service expo in Shanghai next month.” (Shanghai Daily)

Bad in Fuzhou. “Six people, including three children, died at the scene and 13 others were injured. The victims were mostly from a nearby primary school and family members who had come to pick them up for lunch.” (Xinhua)

“How wealthy should China feel?” “The World Bank’s list of upper-middle income countries has 55 members and covers much of Latin America, the less-wealthy parts of the middle east, the poorest countries in Europe and the richest countries in Africa. As our map shows, China’s economic peers range from Colombia to Kazakhstan.” (WSJ)

Expats looking to hire an ayi can head along to the first domestic service expo in Shanghai next month. http://t.co/ahidPAuwiE

These guys had one heck of an opening party last night: Surge Art Beijing. (Smart Beijing)

“Three farmers in Henan prosecuted for establishing their own government.” (China Hush)

“Microsoft to Sell Xbox in China for the First Time.” (WSJ)

“Uncle, Puddle of Accumulated Water: The History Behind Some of Beijing’s Subway Names.” (WSJ)

“10 best Asian novels of all time,” including Dream of the Red Chamber. (The Telegraph)

Ai Weiwei and Martha Stewart, via Instagram via Shanghaiist: 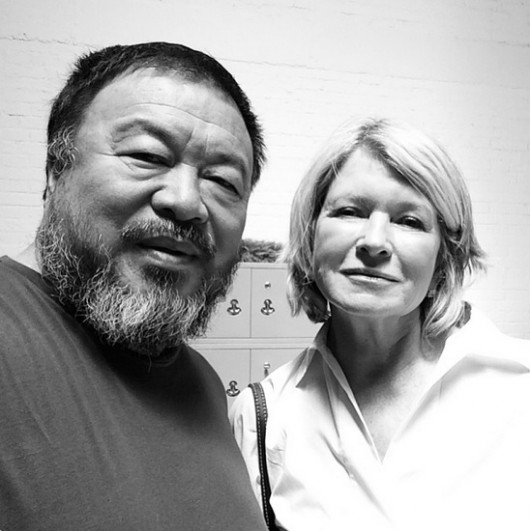