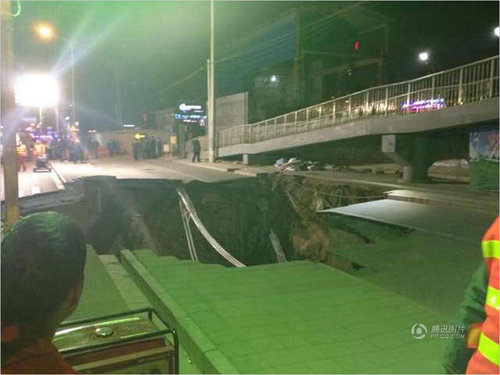 Via the Beijinger: “A huge sinkhole emerged near Shuangjing Friday night, leaving a crater 20 square meters and shutting down traffic on Guangqu Lu.”

“Jerusalem of the East.” “Thousands of Chinese Christians have mounted an extraordinary, round-the-clock defence of a church in a city known as the ‘Jerusalem of the East’ after Communist Party officials threatened to bulldoze their place of worship. // In an episode that underlines the fierce and long-standing friction between China’s officially atheist Communist Party and its rapidly growing Christian congregation, Bible-carrying believers this week flocked to the Sanjiang church in Wenzhou hoping to protect it from the bulldozers.” (The Telegraph)

Famous Shanghai nightclub. “According to guests, police raided M1NT – the ‘global shareholders club’ – around 11pm on Friday, April 5. Rumour has it that owner Alistair Paton, whose nightclubs in London and Hong Kong both shut down under mysterious and messy circumstances, owed suppliers money.” (That’s Online)

5.3-magnitude earthquake in Yunnan. “The number of people confirmed as injured in Saturday morning’s earthquake in southwest China’s Yunnan Province has risen to 26, as the rescue operation goes on. // Five severely injured people are in stable conditions, as relief efforts following the 5.3-magnitude quake continue on Sunday in Yongshan County, the quake epicenter, an official with the county government’s information office told Xinhua.” (Xinhua)

Strike at shoe-making factories. “Thousands of workers took to the streets on Saturday at a shoe making factory in Dongguan under the Taiwan-based Pou Chen Group when workers discovered that the factory has cheated them by using invalid contracts and signing up long-term workers with temporary staff social insurance schemes.” (The Nanfang)

Contrary to what I was told on Saturday, it seems occupation of demolition-threatened #Sanjiang church in #Wenzhou is ongoing.

“Is there light at the end of the tunnel?” (the Anthill)

“A record high of 9.38 million railway trips were made on Saturday, Tomb-sweeping Day, authorities said on Sunday.” (Xinhua)

“Spy Vs. Spy: When is Cyberhacking Crossing the Line?” (ChinaFile)

Via Ecns.cn: “New barriers are put into place on April 2, 2014, at junctions along Chang’an Avenue, Beijing’s main trunk road, in order to stop pedestrians and non-motorized vehicles from ignoring the traffic lights. The barriers open when the traffic lights turn green”: 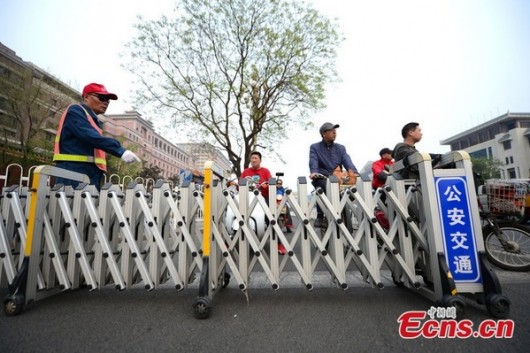