Those of you who follow us will know about C4, the sometimes funny, certainly unique, not-unnoteworthy comedy/variety show via China Radio International that we sporadically syndicate. Among the fun things that hosts Rob Hemsley and Stuart Wiggin have done recently — though not quite as good as “The Panda” — is a bloopers segment that featured none other than Xi Jinping.

A Xi Jinping impersonator, that is: 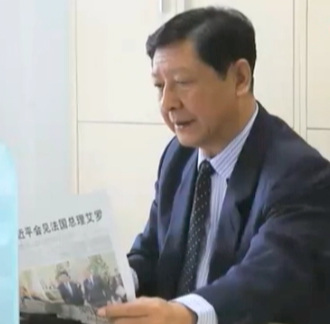 Everyone at the office reportedly liked the short, inoffensive segment — inoffensive not least of which because the impersonator isn’t even that great — but some higher-ups got cold feet, deemed it too sensitive, and knocked it off both Youku and the C4 website.

(“Join C4, China’s funniest comedy news show as we take you on a special behind the scenes look at our weekly planning process,” goes the website’s original description. “You won’t believe who the guys pay a visit to in order to get the stories that they need for next week’s episode.”)

You can watch the segment in its censored form — without Xi Jinping — here.