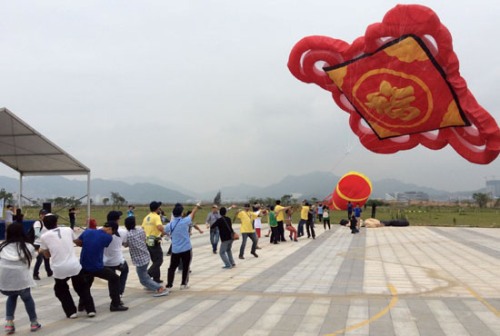 World’s biggest kite in Zhuhai, Guangdong, via The Nanfang

Soon-to-be-weekend links are the best. There’s some sort of fight club party tomorrow night in a warehouse in Sihui, hosted by the Bunker folk. Also, Joe Wong’s at The Hutong, which should be… crowded.

Some interesting suggestions about how to deal with terrorism, such as “You must not spread the news after you experienced it.” “Such attacks, reportedly committed by Muslim extremists and separatists, are being described as terrorist attacks by the state media. On Wednesday, apparently hoping to calm fears, Beijing Municipal Public Security Bureau (the Chinese capital’s police force) took to Weibo to share some advice for citizens in what to do in during attacks on public areas.” (Washington Post)

It’s nearly that time again. “The United States urged China to release rights activist Pu Zhiqiang and other rights campaigners detained this week after attending a meeting that called for a probe into the suppression of pro-democracy protests in Tiananmen Square in 1989.” (Reuters)

More detentions. “Nine gay rights advocates were detained Wednesday early morning in Beijing, right before their participation in a conference on homosexual rights originally scheduled on Wednesday morning. Three of them were still under detention as of late Wednesday. // The nine people, including organizers and participants of the conference, are gay rights advocates or are from related NGOs.” (Global Times)

This is a movie to see, then. “’Coming Home,’ a new film by Zhang Yimou about the ravages wrought on a family by decades of political violence in China and how they (kind of) overcome them, stars Gong Li, his legendary muse. It made Steven Spielberg cry, the Chinese news media reported. Ang Lee, the Academy Award-winning director of ‘Life of Pi,’ was ‘very moved’ by it too, he said on Chinese television.” (Sinosphere)

Allow the Chinese to publish a censored version of a book, or not? “But those explanations fail to surmount an inexorable problem. The most difficult part of writing about contemporary China is capturing its proportions: How much of the story is truly inspiring, and how much of it is truly grim? How much of its values are reflected in technology start-ups and stories of self-creation, and how much of its values are reflected in the Great Firewall and abuses of power? It is tempting to accept censorship as a matter of the margins — a pruning that leaves the core of the story intact — but altering the proportions of a portrait of China gives a false reflection of how China appears to the world at a moment when it is making fundamental choices about what kind of country it will become.” (Evan Osnos, NY Times)

Outsourcing law enforcement? “Chinese police will be patrolling the streets of Paris this summer alongside their French counterparts to help combat a surge in attacks against high-spending Chinese tourists.” (The Telegraph)

More unrest in Xinjiang. “Police shot one suspect dead and arrested another after officers were attacked in the Xinjiang Uygur autonomous region on Thursday. // Two men in a car stopped by police for inspection in Aksu, southern Xinjiang, in the afternoon used machetes to hack at the officers. They also threw explosives at a patrol car, according to the regional information office.” (China Daily)

Both? “Are China’s senior citizens turning deviant, or is a cohort of criminals just getting old? // That’s the question some Chinese Internet users were asking Wednesday after a video surfaced online apparently showing an elderly woman pretending to get hit by a bus in Shanxi province.” (LA Times)

Global 2000. “For the first time, China is home to the world’s three biggest public companies and five of the top 10.” (Forbes)

Amazon shipping to China! Maybe… “For decades, China has been viewed by the West as an exporter. With its latest deal, Alibaba Group is hoping to turn that paradigm around. // On Wednesday, it was revealed that the Chinese e-commerce behemoth was teaming up with U.S. company ShopRunner to sell and ship American goods to China.” (Forbes)

Of course. “Leaked documents in Japanese media purportedly show a contingency plan drawn up by Chinese officials should the North Korean regime collapse, but no one should be surprised Beijing isn’t taking any chances with its Communist neighbor.” (Time)

Dalai Lama and Norway. “Norway’s decision to ignore the Dalai Lama’s visit to Oslo this week to avoid upsetting China has drawn criticism in a country that considers itself a beacon of human rights in the world.” (AP)

Pollution and art. “Increasingly, though, artists are finding their muse in the ecological mire. With photos, paintings, conceptual pieces and performances, they’re piercing through the din of data, seizing the attention and imagination of both the authorities and the public.” (LA Times)

11 detained. “The Philippines said Wednesday it seized a Chinese fishing boat and its 11 crewmen on charges of catching endangered sea turtles in disputed South China Sea waters, prompting China to demand their release and accuse Manila of being provocative.” (Washington Post)

Chinese ship rams into Vietnamese vessels interlude, via the Diplomat:

“Performing With Produce: The Man Behind China’s Cabbage Walkers.” (WSJ)

“From Hong Kong With Love: A Toilet Map for Mainland Tourists.” (WSJ)

“The Art of Social E-Commerce That Xiaomi Taught Us.” (China Internet Watch)