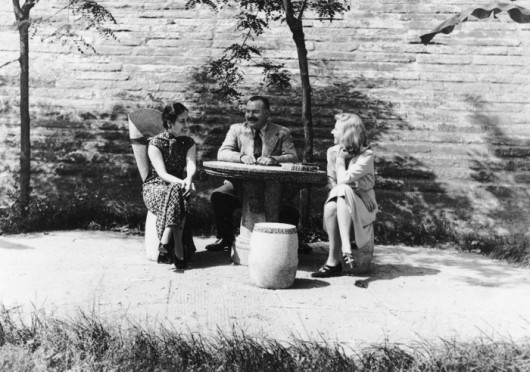 Peter Harmsen of the excellent China in WW2 blog has a great write-up of Ernest Hemingway and his then-wife, war correspondent Martha Gellhorn, traveling to Chongqing in 1941. You may have heard this story before — the couple’s distaste of the country and Hemingway’s dabbling in espionage, among other things – but there are a few anecdotes I’d like to highlight from Harmsen’s piece, titled “For Whom the Gongs Toll.”

First, there was a meeting with Song Meiling, i.e. “The Empress of China,” as Hemingway himself put it (as recalled in Gellhorn’s memoir, Travels With Myself and Another):

Hemingway hit it off with Mme Chiang, but then Gellhorn raised the issue of lepers roaming the streets of China, forced to beg for a living. The Chinese First Lady exploded in anger. The Chinese were humane, she said, and unlike westerners they would never lock lepers up in isolation from other people. “China,” Mme Chiang said in conclusion, “had a great culture when your ancestors were living in trees and painting themselves blue.”

What ancestors, Gellhorn thought to herself, apes or ancient Britons? The encounter wound up with a somewhat strained attempt to part on amicable terms. Mme Chiang offered a peasant’s straw hat and a jade brooch to the famous couple. Gellhorn liked the hat but thought the brooch was “tacky” and was not appeased. Hemingway was amused. “I guess that’ll teach you to take on the Empress of China,” he told his wife with a laugh tainted by Schadenfreude.

The schadenfreude was because Hemingway suspected he’d have an unpleasant time in the Far East, and he wanted to make sure his wife heard him express, “I told you so.”

The following is a far more amusing anecdote though: Hemingway was a champion drinker, likely of baijiu (what else were they going to give him?):

For Hemingway himself, one of the highlights of the trip was a “booze battle” – the famous American drinker against 14 Chinese officers taking turns doing bottoms up. “Slowly officers grew scarlet in the face and slid beneath the table; others went green-white and fell as if shot,” Gellhorn reminisced. Hemingway, by contrast, “was planted on his feet like Atlas.”

And one more quickie: premier Zhou Enlai was apparently a straight-up charmer. From Gellhorn’s memoir via Harmsen:

Gellhorn even had a crush on Zhou worthy of a teenage girl: “I was so captivated by this entrancing man that if he said, take my hand and I will lead you to the pleasure dome of Xanadu, I would have made sure that Xanadu wasn’t in China, asked for a minute to pick up my toothbrush, and been ready to leave.”

For Whom the Gongs Toll (China in WW2)

One Response to “Hemingway Disliked China, But He Was A Champion Drinker”