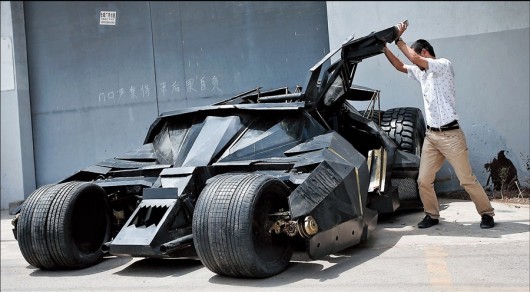 Batmobile in Shanghai, via Shanghai Daily

Going after news assistants now. Xin Jian detained: “A Chinese employee of a Japanese newspaper was detained by police ahead of the 25th anniversary of the 1989 crackdown on the Tiananmen Square pro-democracy protests, the newspaper and family members said.” (AP)

The FCCC calls on China “to present evidence that Xin Jiang has broken the law or, in the absence of evidence, to release her immediately”.

Confessions. “Three youths seen beating up a teenager and then urinating on him in online footage that has shocked China, have admitted their guilt, police said on Monday. // There had been claims online that the victim of the attack in Beijing had died, but it emerged yesterday that he survived his ordeal.” (Shanghai Daily)

Chances that this film is any good? “The fake sphinx is just part of a “simple set for television and film,” a hassled-sounding employee said on Monday. The man, who declined to give his name, said that the structure would be demolished ‘in the near future.’ Photographs from the state-run news agency China News in early May show a film crew working inside the sphinx, which appears to have been hollowed out as a film set.” (Sinosphere)

All the ways to cheat. “The gaokao is a nerve-wracking time for both candidates and their families. In Beijing alone, 70,500 students have registered for this year’s gaokao while over 750,000 have already signed up for the exam in South China’s Guangdong Province. // With so much at stake, some students are tempted to cheat, especially since invigilation is not strong enough in many school and university exams in China. Despite tough measures, the temptation persists.” (Global Times)

Government report targets Tencent’s WeChat. “The crackdown would focus on accounts sending information with the ability to ‘communicate [widely] and mobilise society,’ the report said. // Accounts accused of spreading rumours and ideas about violence, terrorism, cheating and sex would be targeted, said the report.” (SCMP)

Cue the “New York Times runs positive China story!” comments. “Days after a deadly blast in Xinjiang killed scores of people in a busy market, China’s ruling Communist Party vowed to increase employment and educational opportunities in the region, in a sign that it recognizes that it must improve living standards for the region’s ethnic Uighur minority to combat an increasingly violent separatist movement.” (Sinosphere)

Terrorism response. “China has announced the arrest of more than 200 terrorism suspects in the launch of a year-long nationwide anti-terrorism blitz, as it grapples with a deadly wave of violence stemming from its troubled far-western Xinjiang region.” (The Age)

Seems like the great firewall is heavily blocking https connections in recent days, really interfering with normal internet use

Not everyone likes dancing grandmas. “Conflicts between retirees dancing in public areas and surrounding residents complaining about the loud music turned violent Sunday after three dancers were stabbed at a square in Beihai, Guangxi Zhuang Autonomous Region. // Surnamed Li, the 19-year-old assailant reportedly flew into a rage over the music, grabbed a knife at a nearby store and randomly slashed three members of the group.” (Global Times)

Shanghai moves to ban gas scooters. “Gas-powered scooters will be banned from 2016, Shanghai government said yesterday. // Anyone in possession of such a bike should take it to a recycling center — which open from Monday — where they will receive a 200 yuan (US$32) refund and a discount voucher for an electric moped, it said.” (Shanghai Daily)

Drugs. “More than 30 foreigners have been arrested and over 790 grams of different drugs have been seized by the Beijing Police Department over the last three months. From May 15 to 25 alone, police officers captured more than 10 foreign drug dealers and more than 630 grams of drugs.” (The World of Chinese)

A subway passenger was caught by cops in #Beijing Mon for trying to avoid going through long wait of security check pic.twitter.com/M3MTJrPCa7 — People’s Daily,China (@PDChina) May 27, 2014

“First giant panda cub of the year born in China” interlude, via ITN:

“Anti-Asian Hate Was One of Killer Elliot Rodger’s Motivations.” (8 Asians)

“Li Na lost her first Grand Slam match since winning the title in Melbourne, falling to Kristina Mladenovic of France 7-5, 3-6, 6-1 on Tuesday.” (ESPN)

Where to swim in Beijing. (The World of Chinese) 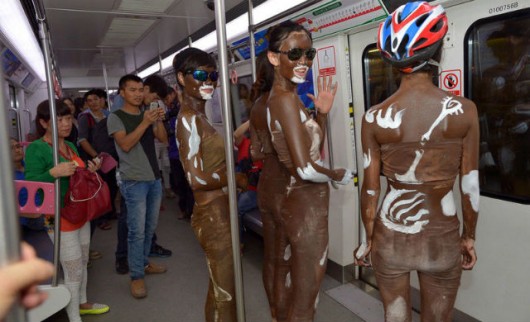