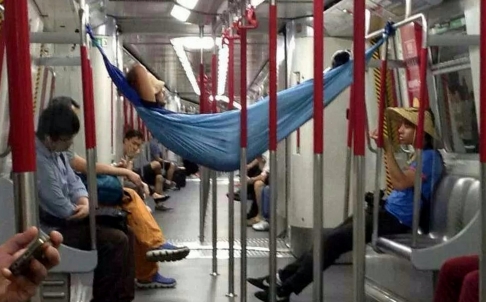 “Passenger slings hammock on MTR to make his very own ‘sleeper carriage,’” via SCMP

Stay tuned for an announcement about a summer short story contest / reading at Great Leap. Belated “I Love You Day” links.

You can thank this man for all the great weather recently, probably. “Photos of Mr. Putin visiting with retired Chinese leader Jiang Zemin, who served as Chinese president between 1993 and 2003, surfaced Tuesday on social media. Chinese were intrigued by Mr. Jiang’s reappearance. ‘Not forgetting old friends,’ wrote Zhan Guoshu, a former editor of the People’s Daily overseas edition, on his Weibo account.” (WSJ)

Sorry, I meant Vladimir Putin, not Jiang Zemin. “President Xi Jinping of China and the Russian leader, Vladimir V. Putin, were unable to announce an agreement on a natural gas deal on Tuesday, despite high expectations that mutual political interests would help finally push through the project.” (NY Times)

Territory. “Chinese President Xi Jinping appeared to warn some Asian nations on Wednesday about strengthening military alliances to counter China, saying this would not benefit regional security. // But he also pledged to peacefully resolve China’s disputes over territory, which have intensified in recent years, especially in the South and East China Seas.” (Reuters)

Vietnam update. “A Chinese engineering and construction company said four of its workers had been killed in anti-Chinese riots in Vietnam last week, raising the confirmed death roll from such violence from two to six.” (WSJ)

Taipei violence. “A bloody knife attack on a Taipei metro train Wednesday afternoon left at least four people dead and 21 injured, with victims sent to area hospitals. // A single suspect, revealed by sources as a university student, was subdued by police and metro staff. Unconfirmed reports indicate the suspect was intoxicated.” (China Post)

One can’t help chuckling at some of these literal translations. “The Chinese name diseases based on symptoms, so diabetes is known as ‘sugary pee,’ while a dyslexic ‘has trouble reading.’ Dementia derives from two Chinese characters meaning ‘insane’ and ‘idiotic.’ // Worried that many people with dementia are so self-conscious they won’t seek treatment, Chinese psychiatrists are calling for professionals and patients to adopt a new term.” (Bloomberg)

From a Hong Kong stalwart. “Like the flavour of tomatoes, the sunniness of summer days and nostalgia itself, Hong Kong’s English-language news scene seems always to have been a shadow of its former self. But this time, maybe, it really is in genuine decline.” (Big Lychee)

High school students in Sichuan re-enact the crucifixion of Jesus for their athletics day: http://t.co/1YBWNPxigm pic.twitter.com/EE6qSKdWl8