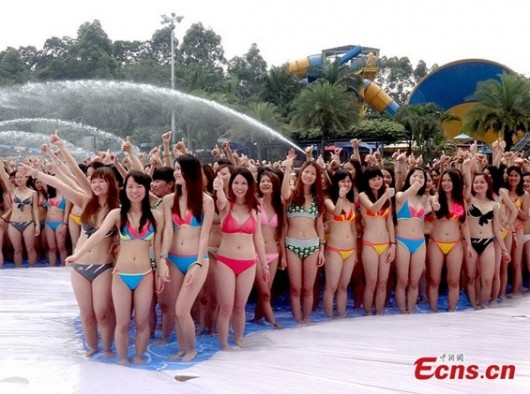 “Thousands of girls join in bikini activity at water park, Guangzhou,” via ECNS.cn.

Posts will be sparse for this week. Vacation links.

Developing story of the weekend:

“The Second Sino-Vietnamese War (and why it’s not going to happen).” (FOARP)

It’s almost that time… “As long as I live, I’ll never forget the rickshaw driver, tears streaming down his cheeks, rushing a gravely injured student to hospital — and away from the soldiers who had just gunned him down. // That rickshaw driver was a brave man, a better man than I, and he taught me an indelible lesson.” (Nicholas Kristof, NY Times)

Boko Haram suspected. “Ten Chinese workers in northern Cameroon are missing following an attack last week by gunmen, the Chinese Embassy in the West African country said. // The embassy said the identity of the assailants was unknown, but it noted that the area had seen frequent attacks by Boko Haram, the militant Islamist group that has said it kidnapped more than 200 girls last month in northern Nigeria, an act that has triggered worldwide condemnation and pledges of assistance from the United States and other countries to help track them down.” (Sinosphere)

Well, well. “Hyon Song-wol, a well-known female performer in North Korea, made headlines last summer in one of the most sensational yet unconfirmed news reports about the reclusive country. // Some newspapers in South Korea and Japan reported at the time that Ms. Hyon was not only a former girlfriend of the North Korean leader, Kim Jong-un, but that she had been executed by firing squad for producing pornography. // But Ms. Hyon appeared at a national gathering of artists on Friday. Her appearance, broadcast on the North’s state-run television, serves as the latest cautionary tale for journalists covering North Korea, one of the most isolated countries in the world.” (NY Times)

Of course. “Two Chinese fishermen released by Philippine authorities have said that sea turtles they were accused of poaching were actually traded from a Vietnamese fishing boat.” (Xinhua)

Sports in Shanghai, part 1. “China’s Xie Wenjun stunned a star-studded field, including the top three finishers in Moscow worlds last year, to win the men’s 110m hurdles with a personal best of 13.23 seconds at the 2014 Diamond League Shanghai meet here on Sunday.” (Xinhua)

Sports in Shanghai, part 2. “At less than two minutes, the 800 meters is not an especially long race. That didn’t keep Algerian star Taoufik Makhloufi from cruising the last few strides at yesterday’s Diamond League competition in Shanghai, waving his arms and wagging his tongue in victory. That premature celebration cost him the race—and the $10,000 grand prize.” (Deadspin)

Good luck. “Beijing will move 300 heavy polluters out of the capital before October to reduce smog and speed up industrial reform, according to authorities.” (China Daily)

From the creators of “What Kind of Asian Are You?” interlude:

“Artist Who Spoke Up About Tiananmen ‘Beaten Unconscious’ in HK Toilet.” (Hong Wrong)

The Great Wall Marathon was Saturday. Here’s a photo via Bridget O’Donnell: 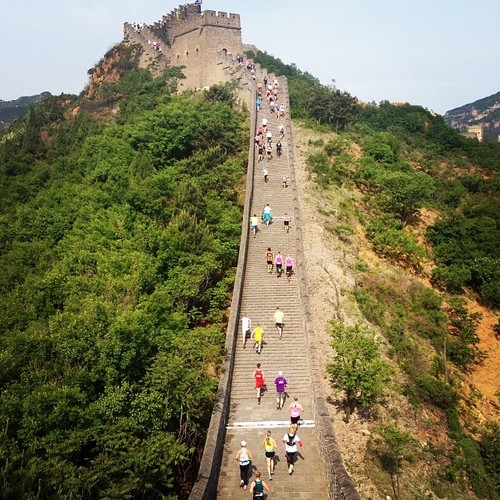