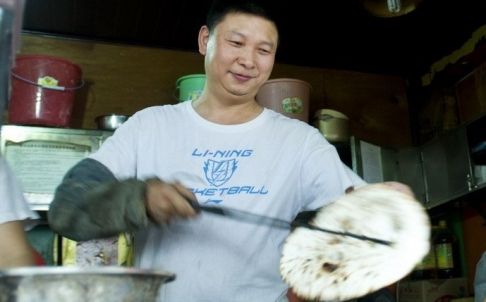 This isn’t Xi Jinping. Via SCMP

Going undercover in the Church of the Almighty God. “The man, who was not named, said church followers were considered holy, while people who had not converted were impure. Those who opposed the group were considered evil. // The man said he met some kind people in the lower ranks. ‘But they’d been brainwashed as they hoped the church would help give them and their families immortality,’ he said.” (SCMP)

Harmless photo not so harmless when Mao is linked with the Church of the Almighty God. “A Beijing-based web editor has been detained by the authorities on suspicion of posting a doctored photo that linked Mao Zedong with a fringe religious group accused in a high-profile murder, a lawyer said.” (Sinosphere)

Profile Chan Tat Ching. “These days, Mr. Chan, 70, collects rent from several properties and helps friends in the trading business. But a quarter of a century ago, he helped create a secret lifeline to freedom for Chinese political fugitives fleeing mass arrests after the armed suppression of protests centered on Tiananmen Square.” (NY Times)

Guo Jian to be detained. “A Chinese-born Australian artist who was detained shortly after publicizing images of a replica of Tiananmen Square he made out of groundpork will be deported from China, Australian officials said on Friday.” (NY Times)

Terrorism. “Chinese state media issued details Friday on 81 people sentenced on terror-related charges — nine of them to death — saying the bulk had belonged to terrorist organizations and committed murder and other violent crimes.” (AP)

Not terrorism. “A rush-hour disturbance at a crowded Beijing subway interchange on Thursday sparked “confusion” among passengers that left two people with ‘minor abrasions,’ the system operator said. // But it sparked rumors online that highlight new jumpiness about terrorism in Chinese cities. // Beijing Metro’s brief statement provided scant details about what happened. It said the unexplained disturbance took place at an underground intersection at Guomao Station, where crowds from the city’s Line 1 meet passengers from Line 10.” (WSJ)

Oh dear. “Two people died and three were injured after wading into a cesspool’s knee-deep filth in an attempt to retrieve a woman’s mobile phone and rescue those who fainted. // The two fatalities were the woman’s husband and mother-in-law, a local newspaper reported.” (SCMP)

The Asian champions! “In a speedy deal hatched over a few drinks, China’s biggest e-commerce company Alibaba is buying half of the country’s most successful soccer club Guangzhou Evergrande for $192 million. // For Jack Ma, Alibaba Group Holding’s billionaire founder and confessed soccer agnostic, it may seem a fanciful move, the latest in a string of recent acquisitions beyond Alibaba’s traditional e-commerce businesses.” (Reuters)

Fat? “A country that only a few decades ago didn’t even bother to keep statistics on the weight of its citizens, China has lately become obsessed with fatness. // The most recent evidence comes from Weibo, where #definitionoffat gobbled up enough attention to become the top-trending hashtag Thursday afternoon, with hundreds of thousands of posts.” (WSJ)

Not fat. “Tangshan’s city market and its customers were shocked and excited (very excited I’m guessing) when a young saleswoman found a new approach in her marketing. To increase sales in the underwear she is selling,  she simply decided strip down and show customers the goods.” (The World of Chinese)

And he returned it. “A sanitation worker from Nanchong, Sichuan Province, searched for over six hours in two tons of garbage to find a red plastic bag containing 3,500 yuan ($560) that belonged to an 89-year-old man.” (Global Times)

Literature. “As a translator of Chinese fiction and books about traditional Chinese culture, I’d like to add my two cents worth here. My suggestions for ‘maximizing exports’ of Chinese literature in translation in 2014 and beyond.” (Bruce Humes)

“A Bite of China” parody interlude, via WSJ:

“Taxi driver violently attacked by foreigner in Shanghai.” (The Nanfang)

“All that glitters: businessman ‘who bought HK$270m of gold’ ends up with metal bars.” (SCMP)

“Six weeks interning in Shanghai showed me a different side to China.” (The Independent)

A competition held in Chunxi Lu in Chengdu got lots of attention today. pic.twitter.com/ifK87UPr9W