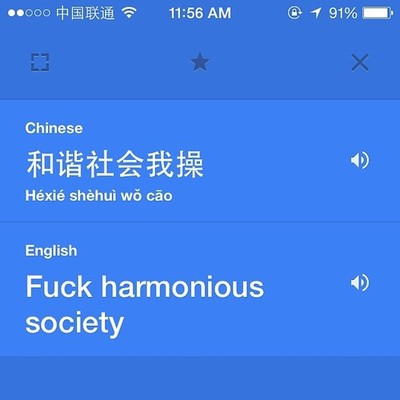 China ramped up its censorship considerably in the lead-up to today, both of words and Internet services. Google is by far the biggest company to find its services halted – as anyone trying to access Gmail without a VPN knows well — and Google has by far the best response to it. We really want this to be true, anyway — via Jonah Kessel:

“Harmonious society” is the government’s official vision for Chinese society, one in which everyone is part of one giant happy family and history is one big bright bouncy castle.

It’s also a hollow phrase that tries to deny reality. So yeah, we don’t really have any use for it, either.

UPDATE, 10:45 pm: As has been pointed out, Google Translate doesn’t have a “phrase of the day.” Nonetheless.