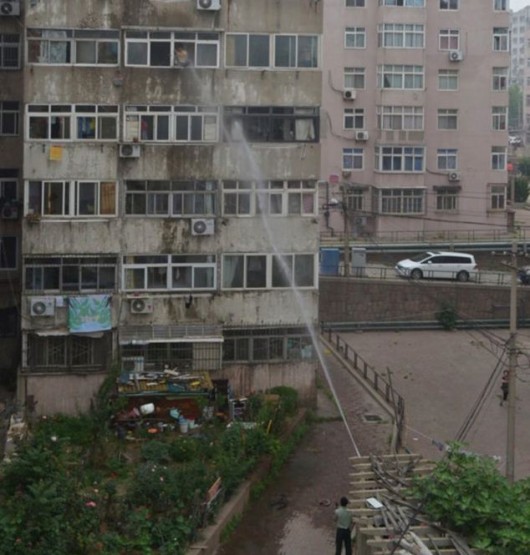 “Chinese firemen stop suicidal man jumping out of fifth floor window… by firing a water cannon at him,” via Daily Mail

Apologies for the sparse posts. We have something fun planned for tomorrow though. Links for now.

Money to be won! “In the spirit of a smaller, more plasticky and wrist-driven World Cup, Heineken are challenging foosball fans to strut their stuff in their 2014 Heineken Foosball Competition over the coming weeks, all the way to the national finals on July 12 in Shanghai. // The 60 preliminary matches will be staged in Beijing, Tianjin and seven cities across the North China Region and prizes include limited edition Heineken Adidas football kits as well as RMB 10,000 prize money for the one lucky tournament winner.” (the Beijinger)

This again. “Animal rights advocates say they have seen signs that the southern city of Yulin is trying to lower the profile of its much-criticized dog-eating festival. The feasting is expected to go ahead as scheduled this weekend, but local officials have taken steps to deflect outside attention from the annual event, at which thousands of dogs are consumed.” (Sinosphere)

Reminds me of when US politicians were pointing at the show 24 to support torture. “The inspection arm of China’s Communist Party this week took a break from its historic investigation into the country’s corruption problems to highlight abuse of power from a fresh angle: the fictionalized depiction of crooked Washington shown in the television program ‘House of Cards.’” (WSJ)

This guy knows how to work a crowd. “Chen posted a full page advertisement in the New York Times on Monday, and a half page ad in the Wall Street Journal, inviting 1,000 poor Americans to lunch. He also promised to give them each a red packet containing US$300, and even included his email address in the ad. The lunch will be held from 11:30am to 1:30pm on Wednesday June 25.” (The Nanfang)

Scary attack. “Check out this shocking security footage of the axe attack at a Xinjiang chess hall this past Sunday (previously reported as a knife attack). [Warning: Viewer Discretion Advised]” (Shanghaiist)

Death sentences for Tiananmen attack: “A Chinese court sentenced three men to death on Monday for their roles in carrying out an attack near the entrance to Beijing’s Forbidden City in October that left six people dead and 39 injured, in what the police said was a terrorist act carried out by Islamic jihadists belonging to the Uighur ethnic minority.” (Sinosphere)

Tiananmen, different context: “The Beijing authorities have detained a woman linked with a Twitter posting suggesting that a method for sending spam text messages might also be used to rally public awareness of the 25th anniversary of the deadly crackdown on the Tiananmen protest movement.” (Sinosphere)

English Momo? “Momo, the popular Chinese flirting app valued at $2 billion, is making a retreat from the international market after it announced plans to discontinue the English version of its service on July.” (The Next Web)

“An afternoon with a Chinese Pick Up Artist.” (Alec Ash, the Anthill)

“The assassination of Kim Jong-un is now the subject of an upcoming American comedy.” (SCMP)

“The Murky World of International Modeling (Excerpt: And the City Swallowed Them).” (Shanghaiist)