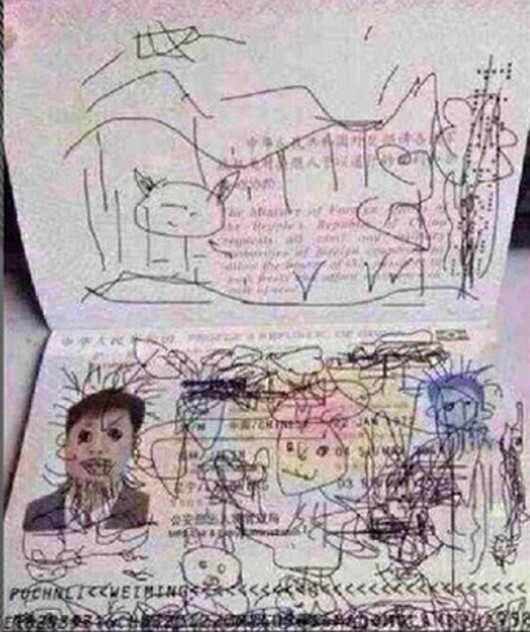 “Child draws all over [Chinese] dad’s passport, dad gets stuck in South Korea,” via Metro UK via Shanghaiist

A horrible, horrible story. “The beating death of a woman in a McDonald’s restaurant in eastern China has triggered widespread anger over the slow response of witnesses and condemnation of a fringe religious group that the police say influenced the attackers. // The authorities in Zhaoyuan, a city in Shandong Province known for its gold mines, arrested six people in the killing of the woman. The police said the six were members of a religious group known as the Church of Almighty God. They had been soliciting new members at the restaurant on Wednesday evening. One of the members, a man named Zhang Lidong, is accused of beating the victim after she refused to give her phone number when asked by his daughter.” (Sinosphere)

Corollary: Graphic pictures of the woman are in the following link. Discretion advised. (The Nanfang)

One more on this subject: “The sheer cruelty of the story stunned Chinese netizens, Many were horrified, considering it even scarier than recent news of Uighur terrorist attacks. After all, terrorist attacks still sound like rare happenings in the ears of most Chinese. Eating at a McDonald’s alone, on the other hand, is an everyday activity. People, especially the country’s millions of single women, need to feel safe about it.  More were deeply concerned, about why no one in the McDonald’s at the time came to the woman’s help, and about why a guy would dare to beat a woman to death with an iron club in public.” (Offbeat China)

Standing ovation for this:

“To do so, GreatFire created a mirror site of Google similar to what the group did for The Wall Street Journal and Reuters Chinese sites when they were temporarily blocked. The site is hosted on Amazon Web Services and uses a subpath of Amazon and Google’s domains that both support HTTPS access. That means China would need to block both hosting domains – which thousands of other Chinese websites rely on – to block the mirror site.” (Tech in Asia)

Never remember. “They peered at the photo blankly, leaning to take in the details. // ‘Is it from South Korea?’ asked a student studying for a doctorate in marketing, with no flicker of recognition. // ‘Is it Kosovo?’ a young astronomy major guessed. // The photo they were staring at so intently was the iconic image of China’s 1989 pro-democracy movement — Tank Man — which showed a lone Chinese protester blocking a column of tanks rolling down the wide boulevard toward Tiananmen Square in Beijing.” (Louisa Lim, NPR)

New details. “In a stunning rebuke to his superiors, Maj. Gen. Xu Qinxian, leader of the mighty 38th Group Army, said the protests were a political problem, and should be settled through negotiations, not force, according to new accounts of his actions from researchers who interviewed him. // ‘I’d rather be beheaded than be a criminal in the eyes of history,’ he told Yang Jisheng, a historian. // Although General Xu was soon arrested, his defiance sent shudders through the party establishment, fueling speculation of a military revolt and heightening the leadership’s belief that the student-led protests were nothing less than an existential threat to the Communist Party.” (NY Times)

Looking back. “In June 1989, the novelist Ma Jian was among the million freedom protesters who gathered in Tiananmen Square. The brutal response shocked the world and crushed the Democracy Movement. But, he says, its spirit and aspirations live on.” (Ma Jian, The Guardian)

“It was 1989: The Tank Man in Beijing’s Military History Museum.” (David Moser, the Anthill)

‘Tank Man revisited’ at a rally on the hottest day of the year in Hong Kong. Photo via SCMP’s Dickson Lee pic.twitter.com/4y5USpis2E

Another detention: “Prominent Australian artist Guo Jian has been detained in China amid a heightened security operation in central Beijing aimed at preventing the commemoration of the 25th anniversary of the Tiananmen Square massacre.” (The Age)

“Nobel Laureate’s Release from Prison May Hinge on His ‘Regret.’” (Sinosphere)

“Ai Weiwei accuses UCCA of self-censorship, tells director not to ‘ruin’ himself with ‘Chineseness.’” (Shanghaiist)

“Mining Tycoon Sentenced to Death for Not Being Powerful Enough to Avoid Death Penalty” (satire). (Ministry of Harm)