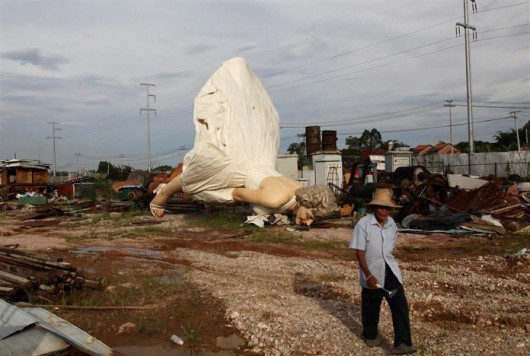 Great Leap is opening a third location at No. 45-1 Xinyuan Jie, that street just inside Third Ring near Liangmaqiao. Segue: we’re still taking submissions for Flash Fiction for Charity, and of course, reservations. Come for a fun afternoon and great cause.

Violence in Xinjiang. “Chinese police shot dead 13 attackers in the restive far-western region of Xinjiang on Saturday after they rammed a car into a police station and detonated explosives, Xinhua news agency said, in the latest of a series of attacks to worry Beijing.” (Reuters)

Traditions die hard. “The protest has been going on for several years but the festival has never stopped. Last year, activities in protest of the festival included open letters to the Yulin government, recruitment of celebrities to condemn the practice and even a petition to the president of the United States. // Local residents are not happy, either. // ‘It is our tradition and our right to eat dog meat. If we are cruel and brutal, what about those who eat pork, beef and chicken?’ said Wei Zhengde, a 28-year-old Yulin resident.” (Xinhua)

Squinch. “19-year-old Pan got one of his testicles fall out after hitting on a tree while riding his bike down a slope, the local television Guangdong TV reported.” (Sina)

Lawyer Pu Zhiqiang. “Police in China have arrested one of the country’s most celebrated human rights lawyers as leaders of the ruling Communist party renew their push to punish government critics. // Pu Zhiqiang, a prominent campaigner who has represented the dissident artist Ai Weiwei, was arrested on suspicion of ‘creating disturbances and illegally obtaining personal information,’ said the Beijing Public Security Bureau.” (AFP)

Goddamn SAPPRFT: ” Reporters in China are forbidden from publishing critical reports without the approval of their employer, one of China’s top media regulators said on Wednesday. // The rule comes as the government intensifies a crackdown on freedom of expression, both online and in traditional media.” (Reuters)

“The challenges of making original content in China.” “The problem of script applies less to an assisted production, where the film is made in China but intended for release elsewhere. But if a film is intended to be shown in the Chinese market the script has to be passed by SAPPRFT. This applies to all films but in the case of co-productions it can mean the project going off the rails. If the partner is a leading Chinese entity the script will be first examined by the China Film Coproduction Corporation (CFCC). // There is also another question: what are the challenges for Chinese producers in making original content within the co-production model? This is equally as problematic.” (Asian Creative Transformations)

Look who has friends! This is a headline: “Our friends in the West.” (Global Times)

Corruption. “It’s no secret that graft is an essential part of climbing the Chinese Communist Party ranks. Now, according to Chinese state media, ambitious female cadres are increasingly being caught taking bribes and trading favors. On June 16, the state-controlled (but liberal) Beijing News named and shamed 12 female officials targeted by anti-corruption investigators in the first half of 2014. The report said most offenders were city officials in key posts. Four have already been charged; eight remain under investigation, although in the Chinese justice system the ultimate conviction rate of defendants is exceedingly high.” (ChinaFile)

Politics. “The brother of politician Ling Jihua, once a presidential ally whose son was killed in a scandalous Ferrari crash in 2012, has been sacked from his post, the Communist Party’s official news website said on Monday.” (SCMP)

Look who’s running SCMP’s new blog. “Social scientists believe that any event in China where there is a stage and a microphone is liable to experience the Chinese ritual known as the ‘Two Sentence Speech.’ // The ritual has two requirements. First, there must be an esteemed, preferably elderly audience member present. Second, nobody present really wants to hear this person talk. // When these two conditions are met, the host must extol this guest’s accomplishments, expound their virtues, and lastly, invite them to 说两句话：Say two sentences.” (Jesse Appell, SCMP)

Beijingers not living prosperously. “What accounts for the numbers? Pathetically, the Beijing CDC doesn’t even try to speculate.” (Bloomberg)

Almost certainly, unofficially speaking, there are more people than this in Beijing. “The population of permanent residents in Beijing exceeded 21 million by the end of 2013, the municipal bureau of statistics said Wednesday. // The figure is based on a sample survey of population last year. It showed that the population of Beijing’s permanent residents reached 21.15 million, 455,000 more than that of 2012.” (Xinhua)

It absolutely infuriates me that I can’t find a media job in the UK. 5 years experience in China doesn’t seem to count for shit.

Very cool online Chinese character information resource! It’s been out a while, I just discovered it. http://t.co/Xu3g5Eljv2

“Beijing From Above, Aka The Story Of How I Was Detained By The Police Because Of My DJI Quadcopter” interlude, via Stuck in Customs:

“A Most Rare Vision: Shakespeare in China.” (NY Times)

“The Chengdu Panda Center and How to Take Photos at a Zoo.” (Brendan’s Adventures)