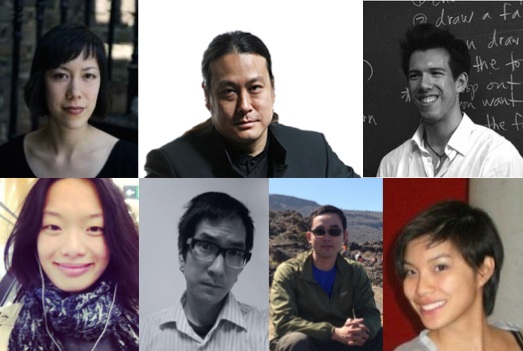 Okay folks, here’s your final reminder that Flash Fiction for Charity is happening this afternoon at 2:30 pm at Great Leap Brewing’s Original No. 6. All the details you need are here. On a semi-related note, while Beijing Cream will still post over the summer (Beige Wind on Thursdays, in particular), I’ll personally be scaling back for about two months starting next week (travel, etc), so come by and say hi and I’ll let you know how you can help us keep going.

For now, below are the profiles of the five selected readers at this afternoon’s event. We’ll give listeners a chance to vote for their favorite, so begin familiarizing yourself with them now. The top two get great prizes sponsored by GLB (it’ll probably involve beer; we hope that’s okay).

In addition, our celebrity readers, Susan Barker and Kaiser Kuo (who should need no intros, but click here if you must), will regale us with their original work.

I am a currently a student at the IUP program at Tsinghua University, and will spend 10 months on a Gruber Fellowship working on a microfinance initiative with the China Foundation for Poverty Alleviation (中国扶贫基金会) in Beijing. I have lived here for exactly one month, but have spent about 2.5 years cumulatively in China. My first book of fiction entitled What Never Leaves based on my travels and work in Asia was published in 2012 by Wilder Voice Press.

Story: If Not for the Melon

William Wang is a Canadian guy who came to Beijing because someone once told him that China is the best country. He’s been here for seven years now, presently working as a guy who makes videos for China Radio International. Yes, he knows you can’t watch videos on the radio.

What do you like best about this city?
It’s really hard to piss people off in Beijing.

Story: The Antecedents of a Rodent

Born and raised in Tianjin until age nine, Qing Qing considers New York City and Beijing her spirit homes. A stint in journalism proved she’s bad at putting out volumes on command, and, at solitude. She’s now Managing Director at a creative agency, assigning commands. Writing has been the way since spiral Mead notebooks, and it’s done out of instinct, like a more perfect, capable, emotional human. In her “Why I’m Leaving Beijing” after two-and-a-half years column, she cites “conscious uncoupling,” “masochistic behavior,” and “infidelity” only to conclude with “oh baby… I want you back!” by Jackson 5.

Been working in Beijing as a college counselor for about a year and a half. She is the only sibling of three who doesn’t currently live in Hong Kong. She also enjoys dancing in unusual contexts.

I came to Beijing when I was 15 and lived seven years here before going to the US for graduate school. I came back in 2010 and now work in Apple as a sales operation manager. Writing is the only thing that makes me feel fully engaged. I love the feeling of creating moments that may touch people’s hearts and capture the elusive truth of life.

Flash Fiction for Charity is July 13, 2:30 pm at GLB Original No. 6. 50 RMB gets you free beer, with all proceeds going to Educating Girls of Rural China. Direct all inquiries to fiction@beijingcream.com.

One Response to “Flash Fiction For Charity: It’s Today, So Come Say Hi”

Leave a Reply to Dan