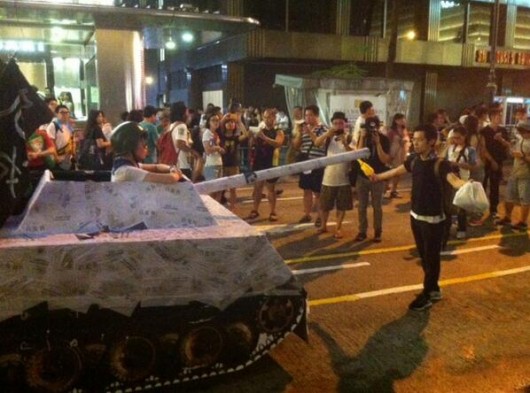 Yesterday marked the 17th anniversary of the 1997 handover of Hong Kong from Britain to mainland China, and in the midst of growing concerns over CCP meddling in local affairs, tens of thousands of Hong Kong residents took to the streets for a democracy march that was the island’s biggest rally in a decade.

Tuesday’s protest appeared to rival in size the largest democracy march in Hong Kong’s history, which was held in 2003 when the deadly SARS virus outbreak and a six-year decline in the housing market produced widespread discontent. The 2003 protest, which lasted seven hours, drew at least 500,000 people, according to organizers, while the police estimated that 350,000 were on the streets at the peak.

The organizers of Tuesday’s march put their estimate at 510,000 people, though they said the crowd was fluid, with a continuous stream from Victoria Park to the heart of downtown for nearly eight hours. A police spokeswoman said late Tuesday evening that the maximum number of people marching at any given time was 98,600, though she did not have an estimate for the number of participants over all.

Police reportedly arrested more than 500 people after the overnight sit-in.

“A showdown is getting more and more inevitable by the day, and some degree of violence is imminent,” said Lau Nai-keung, a Hong Kong politician closely allied with Beijing. “If worst comes to worst, the P.L.A. (People’s Liberation Army, the Chinese military force) will come out of its barracks.”

Yesterday’s rally comes on the heels of an informal referendum organized by the pro-democracy group Occupy Central with Love and Peace (OCLP), which managed to get 800,000 Hong Kongers to vote last week to choose one of three options for electing their next chief executive.

That the vote is merely symbolic — a committee of 1,200 Beijing-vetted representatives make all nominations — was a big reason for the massive turnout yesterday. Hong Kongers are unhappy about being cut off from political decision-making, and they want people to know about it.

Return of old colonial #HongKong flag likely to irritate #China as as much as 500,000 democracy protestors in Central pic.twitter.com/tcjb7liIG3 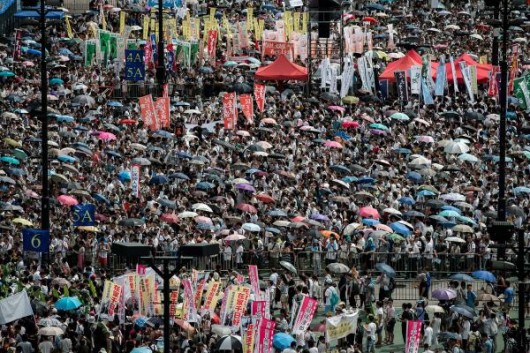 3 Responses to “Hong Kong Stages Pro-Democracy Sit-Down, Its Biggest Rally In A Decade”