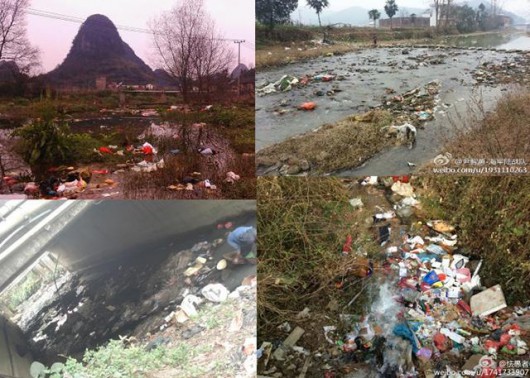 In a video conference held on June 26, Zhejiang People’s Congress deputy director said, “Mass awareness of water pollution should not be understood by data, but by drinking and swimming in the water (and) the leading officials should do this test.”

Leaders testing the quality of water is a longstanding and symbolic tradition in China, but this campaign is probably an allusion to entrepreneur Jin Zengmin’s post on Sina Weibo that contained photographs of a very polluted river in Ruian, Zhejiang and a an offer of 200,000 RMB for any local official that would swim in it for twenty minutes. Bureau chief Bao Zhenming refused the offer according South China Morning Post, blaming the pollution on overpopulation instead of factories in the region.

The response has been polarizing. Those against the campaign have voiced their opinions through microblogging sites and editorials.

Those in favor are dissatisfied with the government’s efforts in following through with newest action plan to curb pollution. Party official Pan Yuejie was quoted in the Global Times assuring citizens that if violations happened, they would find out in no time due to 24 hour surveillance systems. In February, 715 allegations brought forth by government agencies were all proven false.

Whether you agree with holding officials physically responsible or not, the numbers still stand.

Zhejiang’s economy relies on agriculture and aquaculture. It has been reported that its fisherman won’t eat shellfish, and some farmers won’t even eat their yield.

Water pollution, not just air pollution, needs to be addressed earnestly somehow, even if the province’s new campaign sinks or swims.