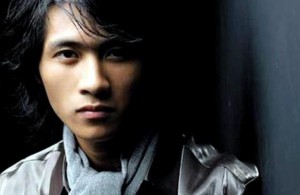 Witty but otherwise empty, The Continent manages to show again that its director-scriptwriter, Han Han, is a dab hand at word games, but possibly little more. Dwelling on the dreams and confusion of modern Chinese youth, a theme that features tirelessly in his novels, the writer (and occasional race-car driver) chooses to tell his tale story from behind the wheel — another safe zone. But directionless and self-absorbed, the journey is more drag than race. Its title song, “The Ordinary Road,” says it all.

[SPOILERS ALERT] Wishing to explore the world outside and look for a pen pal he has fallen in love with, Ma Haohan (William Feng, Painted Skin 2) leaves the small island he grew up on, with two friends: Jiang He (Wilson Chen, Buddha Mountain), a nerdy geography teacher, and Hu Sheng, the narrator (who disappears from the screen after day one). Jiang, a hopelessly naive idealist, soon loses his heart to Su Mi, a “call girl” (May Wang, Driverless), while Ma, who turns out to be less well-rounded and sophisticated than he claims, finds that his epistolary ‘dream girl’ Liu Yingying (Yolanda Yuan, Like a Dream) is actually his half-sister, who’s been hiding the ugly truth about their father from him for decades.

Not discouraged by the lies upon lies they are told, the bumbling pair pick up yet another stranger in A Lyu, an astronomy fan and former motorcyclist who claims to have “lost” his bike and wife. Just as the two begin to trust him, he steals their car. And that is pretty much it. [ENDS SPOILERS]

The deliberate juxtaposition of the two travelers in their crisscrossing countryside escapades guarantees conflict – Ma is a supposedly street-smart taxi driver turned security guard, while Jiang is instantly recognizable as a wenyi qingnian (“cultural youth”), bearing ridiculous glasses and poems learned by heart (even his job sounds straight out of a Cultural Revolution memoir). Yet for the best part of the film’s 100 minutes, the two live in all-but-parallel worlds, only occasionally trading snarky comments with each other. “Cheaters can be trusted partially too!” says Jiang, after their car is stolen by Lyu: Han hopes such lines depict the multiplicity of his character’s inner lives, but should realize by now that telling a story on paper is different from on the screen. 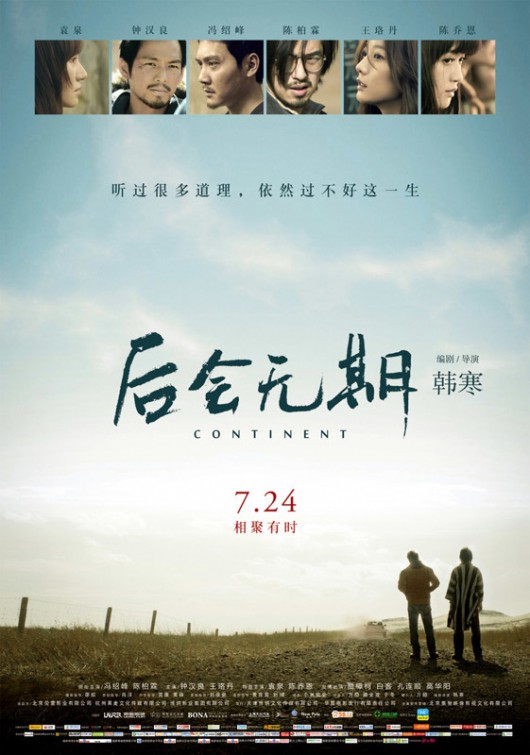 Poster for ‘The Continent’

The females appear, by comparison, better developed. Certainly, their struggles are more compelling than those of Han’s listless, dreamy men. Su’s fraudulent ways are the desperate act of a mother dreaming of giving birth in a foreign country while Yingying chooses to calmly spell out the brutal truth over pool, rather than admit her feeling for Ma. The relative success of their characters only destabilises the drama, making the men look even feebler.

And when the actors start uttering carefully crafted dialogue about life and love (“You haven’t even viewed the world, how can you have a worldview?” asks one. Another consoles, “If you like someone, indulge. But if you love someone, refrain”), it sounds like chicken soup for the soul, served up at a rural Henan funeral. The Continent only offers the kaleidoscope of modern society a road film demands when the two leads are off-camera.

Zhou Mo, for example, a friend they visit, works as an extra in an anti-Japanese war film, a genre encouraged by the government since the 1990s. Su Mi, when told by Jiang that he’s a teacher, mimics a student (“Hello, teacher”), echoing the Dongguan nightclub role-play scene in Jia Zhangke’s infinitely superior A Touch of Sin. Su Mi’s life plan is also a true-to-life epitome of the middle class Chinese Dream (‘get rich and get out’). But what entertained the audience in the Beijing cinema I went to was a line from motorcyclist Lyu, who says his first road trip was delayed in Beijing because “the traffic’s so bad, even the motorcycles can’t move.”

If Jia Zhangke’s masterpieceweaves together the fates of four disparate wanderers, all from the underclass of modern China, Han draws instead on a single generation, the balinghou (post-80s) he grew up with. What these people share is not elite exploitation but insecurity about the future. Cynical cabbie Ma may seem to be the fictionalized race driver himself, but the artistic and clearly more thoughtful Jiang seem closer to the younger, idealistic defiant Han. He was loyal to his faith pushing the boundaries of his dreams; he made it. But the sceptical and pessimistic Ma is what’s left after years of fighting the Man— the government, critics, those who like him, those who don’t. He’s tired and in the end, surrenders.

The book The Continent most resemblesis Han’s 2010 road fiction 1988: I Want to Talk with the World, about a young man driving a Jeep,“1988,” to pick up its owner. As in The Continent, there’s a petty romance with a prostitute – Han likes to present this modern Chinese society through their dejected tales –but also darker, political themes. AIDS, corruption, the death of a dissident in a Tibetan jail, the slaughter of ’89, are all alluded to in Han’s dexterous wordplay (a technique initially developed to evade censorship) but he’s clearly incapable – or unable – of translating that visually.

For millions, myself included, he is still the defiant 16 year old who dared to challenge authority with his sarcasm and smirks. He represented the bravery and integrity we longed to have ourselves. Young adults liked him not only because he was cool but it was cool to like him at the time. Whether Han still is (cool) or not, the sight of fans of Guo Jingming, whose much-derided Tiny Times 3 premiered a week before The Continent, can still induce disdainful sneers at these “wannabe materialists.”

That makes us feel good about ourselves. What shouldn’t engender much pride is how lacking in superiority Han’s product is to Guo’s trilogy (and the only thing preventing the pair from box-office domination is Transformers 4). “I wasted too much essaying in the past years…although they carried my thoughts and may perhaps have had its social meaning.” Han told film critic Cheng Qingsong last week. “Artworks last longer by comparison… Essays are like one night stands, but films and novels are like love… I think I should do more of them.” As an actor, maybe.

6 Responses to “Review: Han Han’s Film Debut ‘The Continent’ Is An Epic Disappointment”