It was just an accident. A gas tank blew up, shattering the glass of nearby restaurants and melting the plastic signs that advertised five-kuai pork-stuffed flat cakes. No one was hurt.

Within a minute, the riot police assistants stationed at the nearby bus station ran over and blocked off the alley with their shields and clubs. The fire trucks arrived twenty minutes later. The city police (the ones with guns) arrived thirty minutes later. Within an hour, all of the wreckage had been cleared away.

The only sign that anything had happened was the missing glass in the now open-air restaurant. The woman who carries the handheld metal detector at the bus stop (see image above) began shouting “you can’t carry liquids onto the bus” and grabbing at offending passengers.

Everyone in Xinjiang is on edge. After the mass killings this past week in the south of the province, the black-shirted police assistants in bullet-proof vests stationed at every street corner stopped checking their cell phones and hanging out in the shade. The soldiers who look like fidgety teenagers handling assault weapons seemed a little less fidgety. The bag checks for weapons at bus stations, parks, shopping centers, and restaurants were even more thorough. Taxi drivers were even more reticent to go to the southern, Uyghur parts of town, claiming that they were off duty for the day (even though they had just let us flag them down).

Eid al-Fitr, or Roza Heyt as it is referred to by Uyghurs, is supposed to be one of the most joyful times of the year. It is the celebration that follows the month of fasting called Ramadan, and in Uyghur society it is usually an intensely festive time, with Sufi-origin Sama dancing and many eaten sheep.

In Ürümchi, this year appeared to be no exception. Families dressed in their finest clothes and visited the homes of their extended families, neighbors, and friends. Children showed off the new toys they had received. But in the privacy of many homes the news of the rising death toll from Yeken (or Yarkand) and Kashgar was discussed in grave, quiet voices. No one knew for sure how many people had died nor exactly what the newest twist in the cycle of violence would unwind. Instead of the usual topics – grandma’s health problems and the cost of school registration – people talked about the precariousness of the future. Violence, uncertainty, and distrust is what grows fear; those that suffer the most often must carry it quietly.

The major Roza concert on July 31, in which celebrities such as Ablajan were slated to appear, was canceled, but by the weekend, the Xinjiang Muqam Ensemble was permitted to put on a modest concert highlighting the songs and dances of Xinjiang’s Muslim minorities. The crowd was enthusiastic, but when the show ended at precisely 9 pm local time they filed out quietly into the night.

There is no longer much late-night street-life in Ürümchi, no outdoor markets where you can eat kabobs and drink beer. The buses stop running at 8 pm, around the time the armed police returned to their barracks, so people just walked home or did their best to find a friendly cab driver. 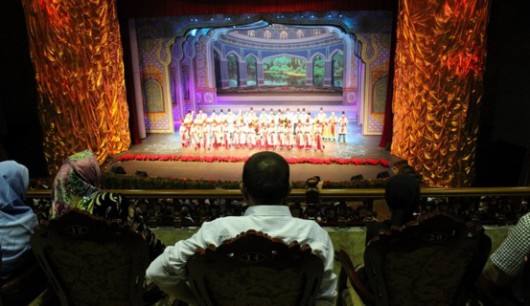