The Uyghur rock star Perhat has a lot of fans in Ürümchi. Walking around college campuses, it’s not unusual to hear Han students humming from the chorus of “How Can You Let Me Be So Sad” – the song Perhat popularized on The Voice of China back in August. And Uyghur students are in awe of how he has become so famous so quickly. They say things like, “Wow, now Perhat is hanging out with rock stars like Wang Feng who sold out the Bird’s Nest in Beijing; just a few months ago I said hello to him when I saw him buying stuff at the corner store.”

Perhat’s success in the most recent round of The Voice of China on September 5 transfixed many, but particularly Han migrants from Sichuan, who were amazed that a Uyghur singer from their neighborhood could sing with so much ferocity. Although they didn’t understand the words of the Tracy Chapman song he sang, “Give Me One Reason,” they remarked quietly on his poise and dignity as he refused to accept his victory over contestants he considered his friends and equals.

Perhat is an exceptional person. From the very first rounds of the show, he distinguished himself as someone different. In a nation where “dream” has become a word of the decade, Perhat said he didn’t have a dream; he said he was already living it. He says he sings for himself rather than the judges or the approval of the audience, but all along he has maintained a high level of humility and grace.

And while his voice is huge, his mentality has attracted an equal amount of attention. As one Han blogger put it:

For a long time music has had a utilitarian goal (in China). We sing songs so we can make money, and gain both fame and wealth…. (But now), like a lion from the Pamir Mountains in the Western Regions, Perhat has broken into this zoo…. You may not understand his world and he doesn’t know your world. He is just going to sing. Maybe he really does not belong to the world of us animals.

The writer then goes on to describe the way he thinks Perhat’s life philosophy is expressed through his music. He compares Perhat’s mentality to the outlook of a Buddhist sage:

When you are happy or depressed and sing to express these feelings: this is music. Music actually expresses the most basic of human values, but now it has become simply a commercial enterprise…. Yet, occasionally, music can still bring you joy and happiness that surpasses material benefit. When this happens it has true resonance with your thoughts! This is why Perhat is different from so many musicians. He is bringing sincerity and honesty to all of us, and this is what our utilitarian society lacks the most.

For Uyghurs watching the show, Perhat’s behavior seemed less esoteric but just as admirable. When he refused to raise his hand in victory after his song battle with Wang Zhuo (above), they saw this as the typical behavior of a friend who is loyal and honorable. Some people call this ogul balidek, which means literally “acting like a man-child,” or simply acting “manly”; other Uyghurs would simply call him a Balangza – an identifier that comes from a mixing of the Uyghur word for “kid” and the Chinese word for “wolf.” Young Uyghur men are proud to refer to each other in this way – as “wolf-kids” – but if it is said by someone from another ethnicity or social class it can also be deeply demeaning. One Uyghur watcher told me:

When I first saw the video, I was very impressed by Perhat’s manliness, after all he is a true Balangza from the heart of Ürümchi, the August First Steel Factory. When I was in college, students like me from other towns were afraid of three groups of Ürümchi students from three neighborhoods: Black First Mountain (Heijia Shan), Sixth Big Bend (Liu Da Wan), and August First Steel Factory (Ba Gang). They were all Balangza and would fight hard for their friends. We (students from out of town) would avoid getting into fights with them at all costs because they could gather a crowd in a matter of minutes and crush you.

When other young men call Perhat a “true Balangza,” they are using the term in a completely positive way: Perhat is both fierce and honest, proud and gracious. The refusal to overshadow someone you respect and the use of threats such as, “If he can’t continue, then I will also not go on to the next round,” is all part of the lexicon of Uyghur masculinity. When Perhat refuses to allow Wang Feng to raise his arm in victory, Perhat is showing us how deep the qualities of friendship are for Uyghur men – they are stronger than the pull to conform to norms of individual triumph that are championed on national television. Maybe this is why more than 7 million people have viewed this video on the Chinese Internet. 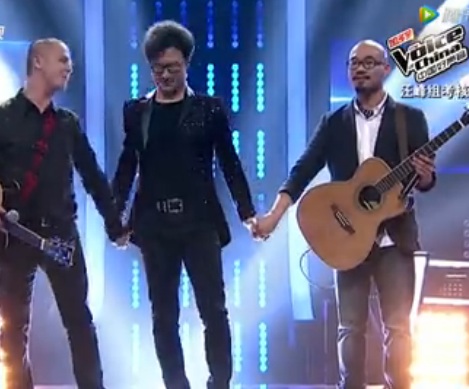 What is unique here is that Perhat is treating his Han counterpart in the same way he would treat a close Uyghur friend. That level of respect across the ethnic divide is what makes Perhat seem so extraordinary; not only does he have the gift of an amazing voice, but he also has the ability to transcend the usual social norms. This is what makes him such a great artist. It is what makes his millions of fans in Xinjiang and across the Chinese-speaking world love him so much. This is why his Uyghur fans call him a “Wolf-Kid” and his Han fans call him “A Lion from the Pamirs.” Even migrants from Sichuan on the south side on Ürümchi are sitting up and paying attention when he takes the stage: he is an animal of another kind.