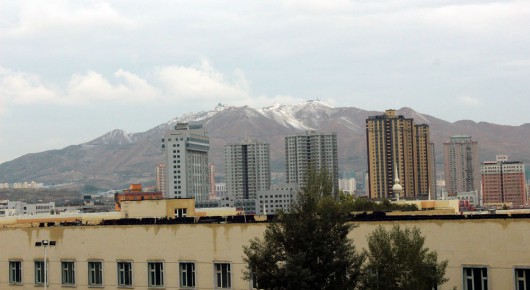 On the last day of the four-day celebration of the biggest Uyghur holiday of the year, Qurban Heyt, or Eid al-Adha, it rained hard and cold. By the next morning a light dusting of snow covered the tops of the mountains overlooking the city. Like many holidays of sacrifice and harvest, this “Feast of the Sacrifice” signals the end of the season of growth and the beginning of the long hard winter. People were already beginning to sell long underwear in the walkway at the intersection of Solidarity and Victory Road next to the Grand Bazaar, and in a week, the heat would be turned on across the city.

But in the lead-up to the early-October holiday, no one seemed to think about the onset of winter. Everyone bustled. Men were buying sheep or keeping an eye out for knife sharpeners as they circulated from housing complex to housing complex. By holiday eve, every tenement seemed to have a half-dozen sheep tied to trees in courtyards or in the basement of a building eating weeds from the hands of brave little boys. 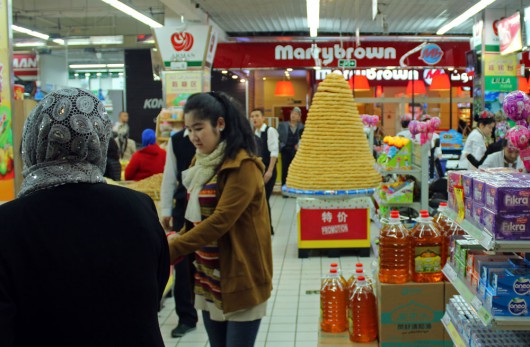 Women, too, were busy doing last-minute shopping for the new outfits that every woman, boy, and girl would need to wear on Sunday, October 5. In the Arman supermarket on Consulate Street, there were long lines of shoppers buying all of the Qurban necessities: nuts, fruit, cakes, sweets, and, of course, the deep-fried rings of noodles called sangza. In Arman they made a five-foot-tall tower out of the stuff. They also offered discounts on all the things needed to fill out the tablecloth and illustrated just what exactly every housewife should buy in a full-color Qurban-special catalogue: 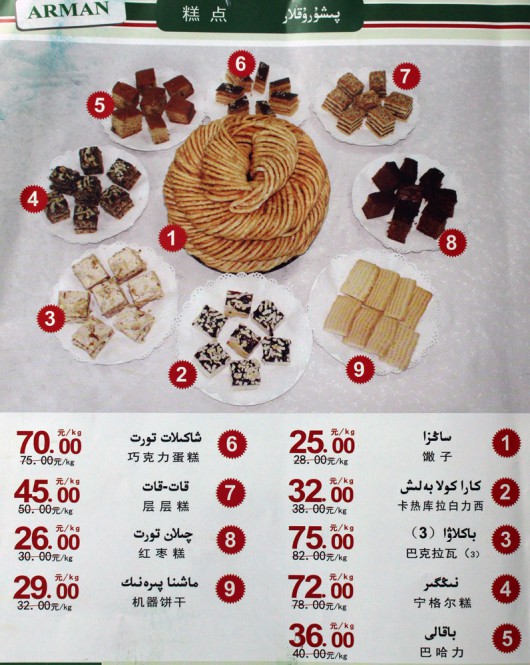 A distribution manager of imported Turkish candy and cakes said his company made more than 200,000 yuan in the two days before the festival began, a nearly 30 percent increase over normal sales.

Early Sunday morning the ritualized slaughter of sheep began. According to Uyghur (and many other Muslim) tradition, every family that can afford a sheep should buy one as a way of commemorating Abraham’s sacrifice of a ram instead of his son Ishmael. This year the cheapest sheep cost more than 1,000 yuan, and a big ram cost twice as much. As meat prices rise, in some ways Qurban is becoming a holiday that only the middle class can celebrate fully. Many farmers from the countryside need to save money all year to buy a sheep. But as one friend told me, “If you can’t afford a sheep, a chicken will work just fine.” And since the holiday is organized around redistribution of meat, everyone gets a chance to eat more than they need. 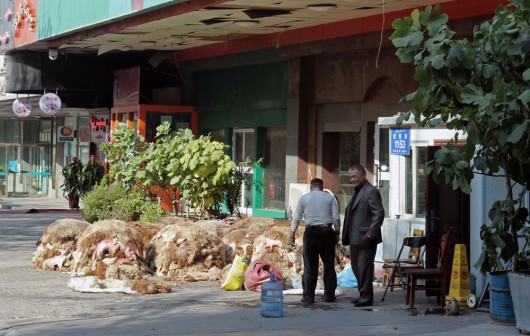 After the animal is sacrificed, believers donate about one-third of the sheep’s meat to the poor by bringing it to their local mosque, where it will be distributed to less fortunate Muslims in the area. They also donate the skin of the animal to the mosque as an offering. At one nearby mosque the imam said more than 700 skins had been donated. Since they will be able to get over 60 yuan per skin to hat and coat makers, that mosque will be able to turn those skins into 42,000 yuan – a substantial source of funding for annual maintenance.

All day, close family members and friends visit each other’s homes to share the festival together. When they first sit down they will each eat a piece of the sacrificial meat and then slowly work their way through a huge meal of Uyghur dishes: dumplings stuffed with meat and perhaps pumpkin, and a pilaf made of rice, carrots, meat, and fat; they may drink soup. Children consume vast quantities of candy, adults drink lots of tea while nibbling on nuts and fruit.

In the end, many prayers of blessing for the household are offered, and then people move on to the next house where more meat will be shared and the happenings of the past year will be discussed.

This is one of the happiest times of the year for Uyghurs. It seems as though very little can dampen the mood. In these moments, when rituals are taught to excited children and dinner tables become spaces of sharing and honoring those at the table, everyone shares a feeling that everything is right with the world.

People talk about how they used to look forward to Qurban for months – marking off each day as that new suit of clothing and those little gifts of candy and money got one day closer on the family calendar. As one young man told me, “Money and new clothes were the best part. I still remember how I just could not fall asleep on the night before Qurban because I was so excited to have some pocket money.” Everyone remembers those days of anticipation. And most of them seem to still get caught up in the spirit of the season.