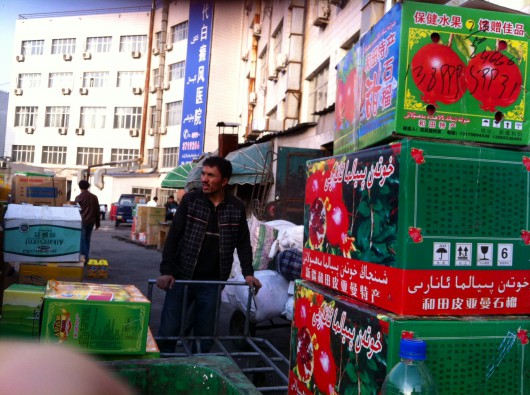 When young people come to Ürümchi to work or study they are often supported by a network of people from their home village. They rely on relatives and friends to help them find jobs and get on their feet. But there is one thing their hosts cannot provide: food from back home. It’s perhaps for this reason that young Uyghurs have developed a food shipping system that brings the tastes of the countryside into the city.

This food arrives in boxes shipped in the cargo hold of sleeper buses from southern Xinjiang. What first began as a side business for a store called Lukman at the South Ürümchi Bus Station has become a full-fledged shipping network across the oases of the South. Lukman handles thousands of boxes of nuts, raisins, pomegranates, cooked meat, and special kinds of naan sent from the kitchens of concerned mothers to their sons and daughters across the desert.

The boxes are marked with the name of the recipient along with his or her phone number and the city where they live. When the box arrives, the person is called to let them know that their mother’s food has arrived. The recipient then goes down to the Lukman distribution center and presents their ID. They pay the shipping cost of 5 or 10 yuan and then live off their parent’s care for the next month.

Every migrant that has come to Ürümchi has stories about how they received boxes from Lukman when they first arrived in the city. They say things like:

“Of course I could buy those raisins and naan in the bazaar here in Ürümchi, but it’s not the same thing as receiving something from your own mother. It is a way for our parents to show us that they care. For many of us, our parents are simple people who don’t have much on their mind except for a few things: the health of their children and saving enough money for the holidays. It is so nice to receive those boxes. Even though I have lived in the city for such a long time now, my mom still asks me all the time if I need anything from my village in Kashgar prefecture.” 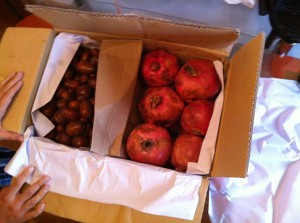 Although many migrants go back to their hometowns — 24 hours away in Kashgar and Hotan — for the holidays, for some of the poorest students and workers who can’t afford to eat in restaurants in the city it is those packages of nuts and naan that sustain them through the intervening months.  Because of the boxes his mom sent him, a rural background college graduate who resettled in Ürümchi told me, “I was able to live on less than 250 yuan a month for the first few years when I was in college. I am not kidding. I would just eat bread and fruit for breakfast and dinner. Sometimes, I would bring my own bread and buy a vegetarian dish at the school cafeteria for 1.5 yuan. That was it.”

For many students and fruit sellers, a breakfast and dinner of naan and tea is common; many people lose weight when they come to the city.

As one long-term migrant told me: “My parents even used to send me cooked lamb. My mom would cook the lamb and then let it cool in its own fat. In the winter, I could keep it for several weeks; surprisingly I never got sick. For dinner, I would just put some meat in hot water, then I would get a nice broth and eat my bread with it.”

The reasons Lukman has been such an essential part of Xinjiang migration to the city are varied. For many people, they use the service because of their precarious status in the city.

As one young man told me: “I think the reason people like this more than the postal service is that a lot of us, especially the migrant workers, do not have a permanent address. Even if they do, they live in clusters of houses with no real address numbers. So it is literally impossible for them to receive shipments that way. Also the postal service requires one to write the address in Chinese, which can be an issue for most people in the countryside.”

Many migrants from the Xinjiang countryside see regular mail service as too slow and expensive.  Since the national system is impersonal, it is seen as unreliable. There is always a chance that what you send will get lost in the shuffle. People say things like:

“(If you use the regular postal system), by the time you get your food, most of it will be spoiled. But with this internal shipping service, people in the South just go to the bus stations in their towns and talk to any driver who is about to leave. You just give him the money and put it on the bus. You can be sure that it will be in Ürümchi the next day, very efficient and reliable.”

Since Uyghurs don’t need to deal with the antagonistic security apparatus and bureaucratic machine of the state, the semi-formal infrastructure of the Lukman system gives people a sense of autonomy and freedom.

While all of this is interesting in itself, even more intriguing is the way Han migrants are starting to use the system as well. On a recent package run I ran into a half-dozen Han migrants at the Ürümchi Lukman station trying to figure out how the system works. They talked in broken Uyghur and commiserated with each other, saying things like, “Oh that’s how you do it.” The Uyghur clerks were patient with them as they tried to communicate what they were there to do; then we all went together to pick up our boxes of fruit from our friends and relatives in the countryside.

After we got our boxes we left in separate directions. We all come from elsewhere, and we live separately. But for many of us, Lukman has become an indispensable part of the art of life in the city.