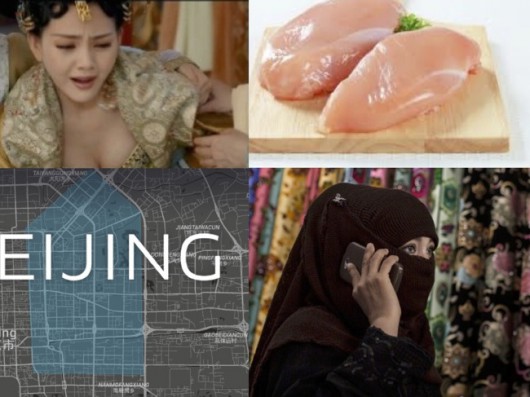 Cleavage (in The Empress of China)

All of the sudden on New Year’s Day, the females on the nation’s most popular TV show, The Empress of China, had their cleavage eliminated. Lots of criticism followed, with popular outspoken businessman Ren Zhiqiang writing on weibo: “People aren’t concerned about cleavage, they’re concerned about a bunch of cultural troublemakers being in charge of making approvals.” Others on social media posted pictures of celebrities and drawings with the cleavage missing.

After the mayor, vice mayor and head of the transportation department all said separately that Shenzhen, a city with 3 million cars and 1 million parking places, would not place a cap on car sales, they placed a cap on car sales, announcing it on Sina Weibo the day it was to take effect and prompting a massive rush to the city’s 2,200-some dealerships. More than 150,000 cars were sold between 5 pm and 6 pm. (For scale, last year 550,000 vehicles were registered throughout the entire year.) Now the city has capped car sales at 100,000 per year (20,000 of which must be electric vehicles). There is a convoluted system for how to earn the chance to attend a lottery or auction to get a license plate.

Although this one has yet to be confirmed because its purveyors are “seeking public opinion,” the Shanghai Automotive Exhibition could possibly ban auto-show girls. “We haven’t ruled out the possibility,” the organizing committee said in a Xinhua report. The ban possibly arose out of “moral concern” and in response to Shanghai’s deadly New Year’s Eve stampede.

China wasn’t alone on this one. Lots of countries banned US poultry after the USDA confirmed a bird flu case at a farm in Oregon. But for China, it’s a big blow to the economy. According to the WSJ, between January and November 2014, US poultry exports to China reached $272 million. The same report says China was the world’s sixth-largest importer of US chicken.

With awareness of corporate default risks rising after Shenzhen-based property development company Kaisa Group Holdings Ltd. missed a loan payment on December 31, the nation has banned individual investors from purchasing bonds issued by small- and medium-sized enterprises through private placement. The move is expected make it more difficult for such companies to issue private bonds.

Fetal sex tests have long been banned, but of course that didn’t stop people from finding a loophole. In recent years, sending pregnant women’s blood samples abroad has become the go-to method. But not anymore.

As of earlier this month, only licensed taxi drivers are allowed to use the best thing to hit cheap car rides since Craigslist’s rideshare, which never made it to China. Uber is facing legal difficulties in a number of countries, and there was just no way something this cool and useful would stand the test of time here, where bans are dealt out like cigarettes.

In case you hadn’t already heard, Xinhua is here to explain: “Burqas are not traditional dress for Uygur women.” Well, that settles that. France is the most well-known place to ban burqas, so it’s not unheard of in the West, but the land of wine and cheese hardly has a majority Muslim population, unlike Urumqi, where, the Washington Times reports, 50 percent of residents practice Islam.

In a strident blow to its education system’s already strained integrity, China has banned university textbooks that promote “western values,” according to Xinhua. “Never let textbooks promoting western values appear in our classes,” said the current Minster of Education, Yuan Guiren. That also goes for “remarks that slander the leadership of the Communist Party of China” and ones that “smear socialism.” It’s no wonder “getting a good university education” is synonymous with studying abroad. But Party officials know this. Xi’s own daughter is at Harvard and thousands of others have sent their children to learn in pluralistic environments.

7 Responses to “This Month In Bans: Cleavage, Uber, And Burqas”