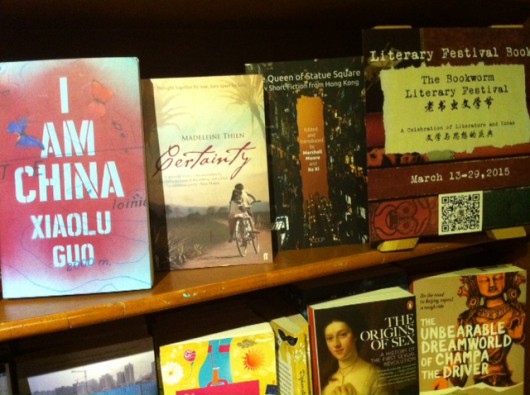 Ed’s note: Tickets to the Bookworm Literary Festival went on sale on Saturday. This year’s program — here’s a downloadable PDF of it – is impressive for both its diversity of content — two journalism panels, stand-up comedy, art, environment, tech, trivia – and the strength of the visiting authors — Chang-rae Lee, Yasmina Khadra, Tahar Ben Jelloun, Willis Barnstone, Victoria Hislop, Michael Meyer. Many events will probably go overlooked. They shouldn’t be.

Disclosure: I am also a Bookworm Literary Festival coordinator. If you’d like to see my picks — of 13 “highlights” — pop on over to LumDimSum. [A.T.]

Thomas says: All eyes were on Hong Kong for much of last year, and for good reason. But while this eclectic cultural hub has long been a global treasure on the cinematic scene, its literary contributions have long gone overlooked — don’t be party to this criminal neglect, and go see one of the most active of Hong Kong’s literati in her element.

Event description: The past year has been one of the most eventful and turbulent in Hong Kong history since the handover. In this event, Xu Xi presents short stories from a new anthology of contemporary Hong Kong fiction, which she edited with Marshall Moore. The stories relate to the ever-relevant issue of Hong Kong identity, written by Hong Kong residents from several walks of life, and cuts to the heart of what it means to be a Hong Konger at a time when such definitions are fluid at best.

Writing Between the Sheets

Thomas says: Hopefully the topic won’t scare too many squeamish readers away — we have some authorities on the topic to talk about defying the taboos and writing about sex.

Event description: Sexual openness is still perceived by many in China as a toxic Western influence, or a flaw in moral character. Yet, increasingly, people are risking disapproval to embrace sexual liberty in its many forms. Why, and how? Join us for a discussion featuring Faramerz Dabhoiwala, author of The Origins of Sex; Lijia Zhang, whose novel Lotus focuses on prostitution in modern China; and Jemimah Steinfeld, whose book Little Emperors and Material Girls examines China’s sex and youth culture. This event is in English and Chinese.

Rainbows in the Night: Chinese Contemporary Queer Writing and Filmmaking

Thomas says: Always relevant, and never clear-cut, LGBT issues in China remain a talking point the world over. This year’s festival event looks at the state of queer literature and film in the Middle Kingdom, offering insight on one of the most interesting microcosms of Chinese arts today.

Event description: China has a long history of queer literature and culture, from Long Yangjun to Jia Baoyu, the opera The Fragrant Companion to the movie Beijing Story. Recently, many works with strong LGBT themes have emerged, but few have entered the mainstream due to China’s publishing standards. How do authors and filmmakers in this genre push back against institutional challenges? What is their creation process, and how do they obtain feedback for their – as panelist Popo Fan puts it – “rainbows in the night”? Join our distinguished panel of writers and filmmakers for an eye-opening discussion on these and other issues. This event is in English and Chinese.

Thomas says: Poetry is getting more and more popular among youth in Beijing (thanks in part to regular poetry events, including those at The Bookworm). Here we have the opportunity to witness young, raw talent at its sharpest. Zohab won the Australian Slam Poetry championship last year, and so mustn’t be missed by poetry fans or those wondering what it’s all about.

Event description: In a rousing set, Zohab Zee Khan combines poetry with hip-hop to enthrall and entertain, giving listeners a new outlook on the possibilities of the spoken word. Khan is the 2014 Australian Poetry Slam champion and 2014 International Poetry Slam finalist. He is also a proficient didgeridoo player, harmonica beat-boxer, and percussionist.

Dogs at the Perimeter

Thomas says: Madeleine Thien is one of those brilliant writers whose works become critical darlings but fail to grab too large a foothold in the popular consciousness. Here she talks about her latest book, a haunting novel set in Cambodia after years of conflict and horror.

Event description: Award-winning Canadian novelist Madeleine Thien has written a powerful and starkly beautiful novel about Cambodia, Dogs at the Perimeter, which was a finalist of the 2014 International Literature Prize awarded in Berlin. Investigating the long-term damage of conflict and grief on life and on the mind, she weaves these ideas into luminous prose. She talks about her deeply moving new novel.

The Unbearable Dreamworld of Champa the Driver

Thomas says: While it’s impossible to pick favourites, this book has been a surprise hit amongst the Bookworm staff, who got to preview this year’s festival books ahead of time. At first unassuming and not too attention-grabbing, those who take the plunge and pick up the book are unlikely to be disappointed. This event promises the chance to hear and converse with the author of this and The Fat Years.

Event description: Chan Koonchung, whose first novel, The Fat Years, was a dystopian sci-fi thriller about a society enslaved by consumerism, has returned with another work to test the boundaries. The Unbearable Dreamworld of Champa the Driver follows the life of a young man from Lhasa who takes a driving job for a Han businesswoman. Cosmopolitan, car-loving, and Mandarin-speaking, he embarks on an affair with his older, status-conscious employer. When he leaves for Beijing, the relationship unravels along with his boyish dreams, which crack under the weight of endemic racism.

Thomas says: In a festival stuffed with unique multicultural voices, Kim Thuy’s is one that still demands attention. The Vietnamese Quebecois author has seen both success critical and commercial in French, and her works translated into a variety of languages. Her novels Ru and Man are available at the Bookworm, and the woman herself will be here to discuss her works, her themes, and what her unique voice offers us as readers.

Event description: Born in 1968 into war-torn Vietnam, Thúy was one of the boat people who fled the country when she was 10 years old. A former seamstress, restaurant owner, interpreter, and lawyer, she now resides in Montreal as a full-time writer. In the prologue of her first novel, Ru, Thúy wrote: “In French, ru means a small stream and figuratively, a flow, a discharge – of tears, of blood, of money. In Vietnamese, ru means a lullaby, to lull.” Find out what she feels it means to her in this talk about displacement and identity.

Research, Inquiry, and the Writer’s Work

Thomas says: At first it sounds like the kind of lecture first-year undergraduates dread — but on second look, this might be one of our most fascinating and insightful panels. So much of a writer’s work is research, to help fiction ring true or keep non-fiction honest, and our writers for this event are old hands at the process. This event sheds light on perhaps the least-known part of the writer’s work.

Event description: Contrary to what some might think (or hope), a writer’s story rarely emerges from the mind fully formed. Indeed, it’s often pieced together through research, requiring patience, resourcefulness, and painstaking attention to detail. In this talk, four writers known for pursuing very different subject matters discuss their working process.

Thomas says: Xiaolu Guo is a story-weaver comfortable on both the page and the screen. Her fascinating A Concise Chinese Dictionary for Lovers captivated audiences the world over, but especially in the Chinese expat scene, given its cross-cultural relationship subject matter. Her latest book is her largest and most ambitious to date, and attendees shouldn’t miss this talk by the engaging and vivacious author.

Event description: I Am China is the new novel from Xiaolu Guo, author of A Concise Chinese-English Dictionary for Lovers, inspired by Allen Ginsberg’s poem “America” – a look at rock and roll youth living in exile. The book is “a multilayered exploration of politics and culture across three continents,” writes The Guardian. “Cultural references, from Johnny Rotten to Erik Satie, are refracted through a lens of Chinese politics.”

Thomas says: A down-to-earth but not rose-tinted look at the reality of life for writers of many stripes, both past and present. Zhi An, biographer of Lu Xun’s brother Zhou Zuoren, joins contemporary British novelist and philosophy writer Will Buckingham to discuss the many-faced beast that is the writer’s life.

Event description: Oft romanticized but just as often misunderstood, what actually constitutes life for a writer? Chinese author Zhi An and British author Will Buckingham discuss the realities of this no-collar job. Zhi is the author of a biography about Zhou Zuo Ren, brother of Lu Xun, China’s greatest modern writer, while Buckingham writes novels and philosophy, and is the author of a guide for aspiring novelists called Write a Novel Course. This event is in English and Chinese.

Thomas says: The process of writing a short story can itself be a tale worth telling. But throw in the subsequent journeys through translation, editing, and publication and you have a talk not to be missed. Again, this is one of those that seems like work at first glance, but is sure to be an engaging and eye-opening look at a part of the writing process we usually try not to think about. Retaining an author’s voice while communicating the same meaning is a delicate balancing act, and one that our panelists are more than qualified to illuminate for us.

Event description: This event will focus on a single short story — tracing its progress from the original composition in Chinese through the entire process of translation, editing, and finally publication — with local author Sun Yisheng, translator Nicky Harman, and Pathlight editors Eric Abrahamsen and Dave Haysom. This event is in English and Chinese.

The Reward of Complex Literature

Thomas says: Suggest sitting down with some James Joyce or Shakespeare are you’re likely to meet with groans in a teenage classroom – but for those of us who know better, young or old, complex literature is an immensely rewarding experience. Whether an avid literary bookworm yourself, or just contemplating dipping your toe into the vast sea that is Literature with a capital L, this talk is worth a second look. Our speakers are themselves old hands at delving deep into meaning and metaphor, while keeping their writing accessible even to those for whom reading is more of a fond, occasional hobby than an all-consuming passion.

Event description: A talk about the stories of humans and human societies, featuring authors who impart powerful messages and contemplate complex issues through their writing: surrealist Dorothy Tse, master of metaphor Guadalupe Nettel, and realist Xi Ni Er. Join them in a conversation about literature as message and messenger.

Thomas says: More than a little bias went into this choice, I admit. Here we have a trinity of British short story writers whose prose is excellent, but who may fly under the radar for readers who tend to just go for bestsellers and book club choices. Literature is still something most people associate with Britain (despite a century dominated by incredible American writers), and these modern writers from across the isles are all names worth knowing.

Event description:  Superhero dictators, East German opera lovers, dreamers and hunters… a restaurant for zombies, Wales’s Rhondda Valley, a taxidermy class… these are just some of the characters and settings in the short stories of Adam Marek, Rachel Trezise, and Zoe Gilbert, who’ll share their works and introduce other imaginative, riveting, mordant works of contemporary British fiction.