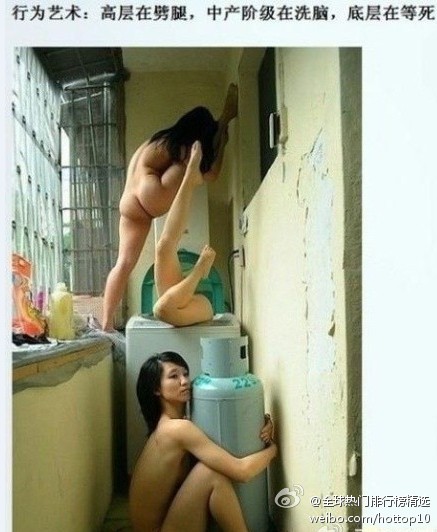 Via Ministry of Tofu: “A vivid portrayal of the Chinese society: The upper class is doing the splits (slang for two-timing); the middle class is being brainwashed; the lower class is awaiting their doom.”

On this, the day that car ownership in Beijing surpassed 5 million, here are your links for the weekend.

So this is kind of like Wee-Bey driving through East Side pre-New Day Co-Op and expecting not to get shot? #KnowYourChineseNeighborhood “Journalists from French broadcaster France 24 and the Netherlands Press Association have reported being attacked in Panhe village in Zhejiang province yesterday and today while investigating land grab protests that took place earlier this month…. When they reported what had happened to them to the police, the two were told that they were attacked by villagers because of a rivalry between the eastern and western parts of the village. Update: They were compensated with 45,000RMB for personal damages and damages to their equipment.” [Shanghaiist]

Orville Schell writes, we read. “As Ma began to rise from bended knee to see that Streep was splayed faced down before him, he was triggered into another almost autonomic expression of respect. This time, he bent down and touched his head to the floor in a full-blown kowtow. Then, realizing that she was still fully supine before him, he, too, went down face-first on the floor, his Stradivarius cello and bow awkwardly splayed out in front of him like the crutches of a pilgrim at Lourdes. // As they finally stood up from the strange pas-de deux , grins of amused stupefaction spread across their faces. Recognizing that something quite unprecedented had just transpired on this stage, the Chinese audience, too, was going berserk, clapping, laughing, hooting, and cheering in a state of rapturous delight. // So, what was it that had happened?” [The Atlantic]

In an editorial that ends with, “History does not bode well for the American way. Indeed, faith-based ideological hubris may soon drive democracy over the cliff”: “Many have characterized the competition between these two giants as a clash between democracy and authoritarianism. But this is false. America and China view their political systems in fundamentally different ways: whereas America sees democratic government as an end in itself, China sees its current form of government, or any political system for that matter, merely as a means to achieving larger national ends.” [Eric X. Li, NY Times]

This is well done. “On February 15, @果壳网 started the picture series of ‘in the eyes of…’ on Weibo micro-blog.  Format: Use a series of pictures to express yourself in the eyes of parents, friends, passers-bys etc.” [China Hush]

Here is where you can get 30 kinds of “chop suey”-like fonts. “‘Ethnic’ typefaces, though often only found on sketchy websites offering free font downloads, survive today simply because they are good at what they do: distill an entire culture into a typographical aesthetic that becomes a signifier to the uninitiated.” [Chappell Ellison, Good Design]

Censorship is the bitterest pill, a slow kill. “Zhu Hua put out an album that year called What’s Wrong with Me. Just when the 17th Party Congress wrapped up, the censorship office said, ‘We just started a meeting to dictate the direction [of the country] and then you ask what’s wrong with me. What vicious motives are you harboring?’ So he changed the name of the album to Focused Like This.” [China Digital Times]

Well, this is pretty grim. “Ten Deadliest China Coal Mine Disasters Since 2000.” [ChinaShmina]

Your China Heat video of the day:

Your Jeremy Lin story of the day 1: Hannah Beech, who’s written about China’s sports system, on why China can’t produce a point guard: “The problem is compounded by the Chinese sports system’s focus on endless drills and discipline over the kind of creative play needed for successful point guards.” [Global Spin, Time]

Your Jeremy Lin story of the day 2: “Lin’s following, large as it sounds, is still just a fraction of some high-profile mainland Chinese. Pan Shiyi — a Beijing-based property mogul some people liken to Donald Trump — has 8.6 million followers. Hong Huang — a publisher and commentator who is often described as the ‘Oprah of China’ — has four million. Lee Kai-fu, the former head of Google China, has 11 million. // The comparisons may be unfair since none of these Chinese are athletes and all have had profiles on Weibo for longer. But high-profile mainland athletes like Yao Ming, Guo Jingjing (the glamorous Olympic gold-medallist female diver), Liu Xiang (the Olympic gold-medallist hurdler) don’t have a presence on Weibo. Only Yi Jianlian has a profile; the mainland Chinese NBA athlete who plays for the Dallas Mavericks has 6.5 million followers.” [Behind the Wall, MSNBC]

One Response to “Friday Links: Orville Schell and Hannah Beech, Jeremy Lin, and a Wire reference”