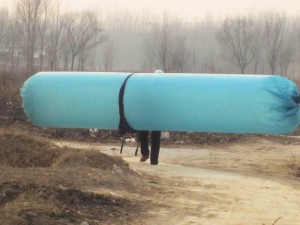 Via China Smack, this is actually a Shandong province villager smuggling natural gas.

On the day after you probably got a haircut, since it’s auspicious to get haircuts during Longtaitou (龙抬头) Festival, here are links.

Probably the most concise, insightful perspective on the Nanjing Massacre not written elsewhere. “Ever since defeating the Nationalists and unifying China in 1949, the Communists have claimed that they won both the Anti-Japanese War (the Japanese war with China during and before World War II) and the Civil War, and therefore have the right to rule China. If the Communist Party saved China from the Japanese during the War, then why did they do nothing to prevent the Nanjing Massacre? // The Party appears to have sidestepped this conundrum during the Mao era by ignoring the Nanjing Massacre. Instead, they concentrated on highlighting the (minor) role that CCP forces played in beating the Japanese. For three decades after the Second World War, it was not possible to openly discuss the Nanjing Massacre in mainland China. In a similar way, much else was forcibly airbrushed out of Mao era debates on the War, such as Chinese traitors and the role of non-communist forces in beating the Japanese.” [Tony Brooks, via Foreign Policy]

Former Chelsea star Anelka — “new-boy,” according to China Daily headline — is learning why Shanghai finished 11th last season in the CSL.“‘I have a feeling that at the beginning of the game, he was concerned that other playerscouldn’t receive his passes or they couldn’t create what he wanted,’ Li [Hui from BlueBoys SupportersClub] said. ‘However, he can’tdecide the result alone. I saw the players were eager to cooperate with the newcomers, butthey still need time to gel.’” [China Daily]

Yup, that’s the Atlantic putting Mao Zedong and Jeremy Lin in the same headline. “Introduced to China over a century ago by YMCA missionaries just a few years after the game’s 1891 invention in Springfield, Massachusetts, basketball has seeped into the fabric of Chinese lives. Until the NBA arrived in early 1990s, basketball had come to feel so intrinsically Chinese, most people did not even associate it with America. Unlike in the U.S., where a garden of sports — from baseball to football to ice hockey — all play a part in shaping a diverse athletic landscape, in China, basketball is perhaps the only true national sport, the only sport that brings together people of all backgrounds and kindles the nation.” [The Atlantic]

Your B-movie for weekend viewing: