First, as a token of good faith, I offer this piece of advice to all Chinese galleries: don’t skimp on wine at openings. Free-flowing liquor will ultimately work to your advantage when plying potential customers, especially when you’re going to need to exact mental debilitation on them to sell your wares.

Case in point, the most recent group exhibition hosted by 798’s Art Bridge gallery, in which demure volunteers poured quarter-glasses of garden-variety reds, orange juice and Coca-Cola. Art Bridge, HELLO: you’re hosting an exhibition opening, not a wine tasting. Forget pouring samples, the purpose of wine is not to train a visitor’s palate but to make the shit you’re hawking more palatable.

The exhibition was titled “Changing View: Round Two Nominating Exhibition of Contemporary Ink and Water,” and it is still unclear what the artists were nominated for. I was accompanied by the dauntingly sober Lola B, resident Creamer and recovering art student, who plowed through the paintings doing full-on crits. God bless her, it was like watching Bob Costas commentate tee ball. What do you say about a painting of a puppy lying next to an old phone receiver? Nice stock image? Why yes, puppies are cute? His plaintive and innocent eyes gazing into mine assure me of naïveté and perfect love? 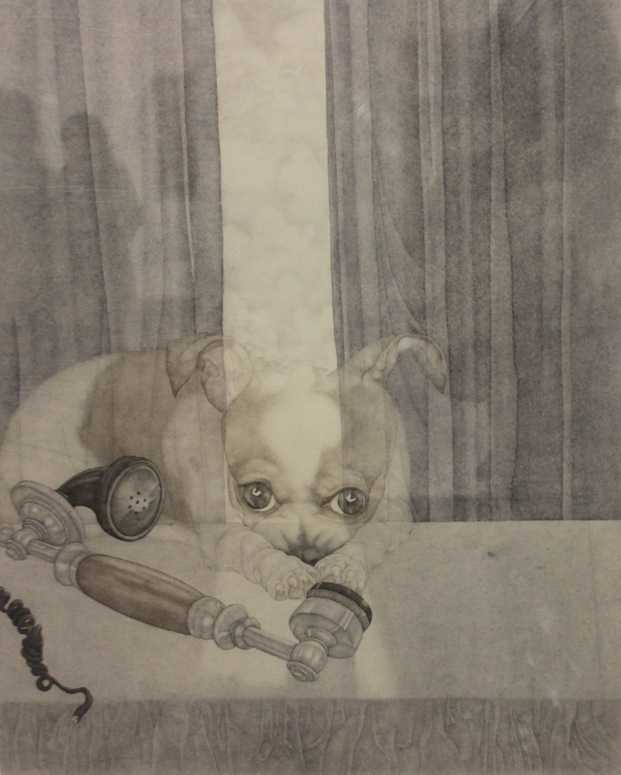 Okay, actually I did like the puppy piece, though for no good reason. To everyone’s detriment, the exhibition was not entirely puppy-themed. As is the case with many works of Chinese contemporary art, the draftsmanship was unimpeachable, but they failed to live up thematically. Specifically, this: 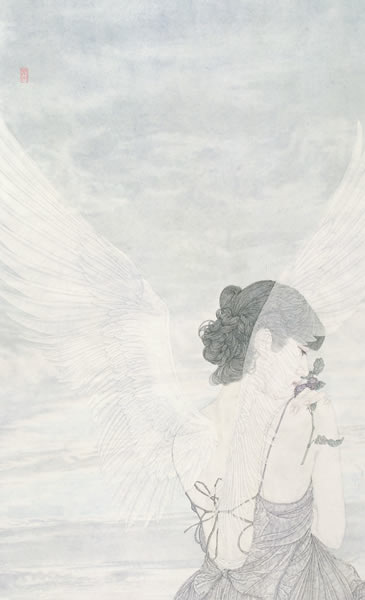 Zheng Qingyu, A Rose is a Rose :: 郑庆余，天使的玫瑰也会枯萎 (Chinese title translates as "Even an angel's rose will wilt")

This should not happen in a professional exhibition. Setting aside the Pre-Raphaelite-on-a-bad-day coiffure, what in the world would possess an artist (or adult human, really) to paint this? It’s like a particularly shallow teenage girl’s idea of beauty. I especially like the black rose, which looks like it comes straight out of Evanescence’s Tumblr feed. It’s so cheesy it may legitimately be a postmodern joke, or at least a what-can-I-get-into-a-Chinese-gallery drunken bet between artists. Zheng Qingyu had three pieces in the show, and none of them communicate a damn thing. As a viewer, I felt like I was listening to muffled sounds of the artist in a one-way conversation with himself. Fun fact: in 2009 Zheng was in a group exhibition subtitled “Contemporary art exhibition of new intellectuals” at the China National Museum of Art. I’ll leave that without comment.

But as with most group exhibitions, somehow a couple of artists of talent managed to slip in. Dang Zhen’s “Monochrome Fable – Farewell to My Concubine” (the movie Farewell My Concubine in all its majesty is here on Hulu). depicts a slovenly, pants-less man and an actor in full Peking opera regalia riding sidesaddle on a purple horse. This is, admittedly, something of a dream of mine (I am the horse). It’s nonsensical and disorienting in a good way. It’s challenging. 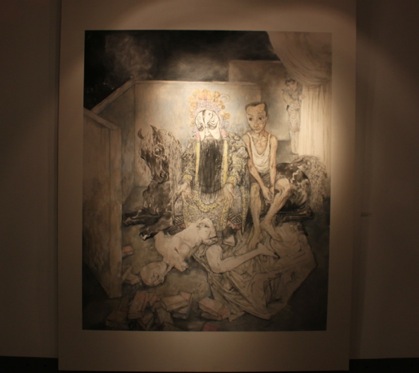 Which is probably why I also liked Chen Lin’s meticulously plumed bird paintings, one of which is below. Yes, they felt banal, probably even more so if I knew more Chinese art history, but they at least tried to find meaning somewhere other than fantastically beautiful women and voluptuous nudes. (Quick interlude regarding nudes: it’s vaguely sexist and astounding that this can still fly in the 21st century. It’s also why sometimes even the best technically crafted pieces are just so-so – they mine tired symbols and cheap sentimentality for a sense of significance, when in fact they are lazy and formulaic and not worth my time.) 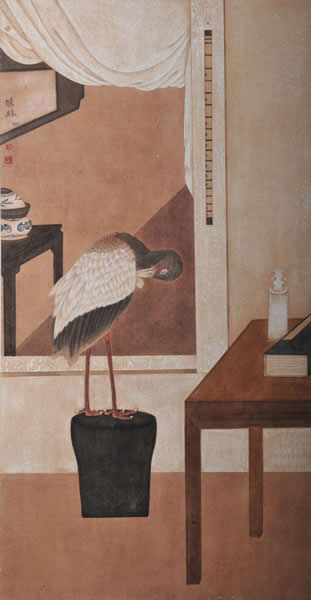 The biggest problem with most of the works at Art Bridge’s exhibition is not that they’re trite, but that, sadly, they’re still convincing. They were convincing enough to a handful of artists and academics to get into an exhibition at an established gallery. Artists are well aware that they get away with this crap. It’s a delicate, insular and insecure art world in China, and I think on some level a lot of successful artists and professionals at least vaguely understand that they’re shilling glorified pet rocks.

“Changing View: Round Two Nominating Exhibition of Contemporary Ink and Water” will run at Art Bridge Gallery until February 28. Go see it. Or, you know, don’t.

2 Responses to “Guy On Art: The Curse Of Technical Perfection – Review Of Art Bridge Exhibition In Which Artists Drew Whatever”