Youku video for those in China after the jump

On August 14, 2009, YouTube user tammyiscool uploaded a video in which she sings the Pakistani national anthem to “wish Pakistan a happy independence day.” By all means, the video — which you can watch after the jump — did well for itself, garnering 538,767 views (as of this moment) with a 95 percent like rate. She posted a follow-up in September titled “chinese girl sings jazba-e-junoon for eid (eid mubarak!)” that did pretty well too.

Earlier today, she posted the above “to let all my Indian friends know that China loves India too.” We should be impressed by the fact that she sings pretty decently in Indian, which I’m going to assume is not her native tongue. But I suspect — fear, really — that she’s about to find herself caught between a bit of nasty online crossfire. When you serenade both sides to the middle, there’s bound to be some jealousy and jilted hearts. 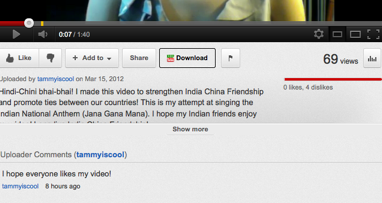 But should we be surprised? After all, two of the featured comments on her Pakistani videos were:

Tammy, bless your heart. We eagerly await your next piece of work.