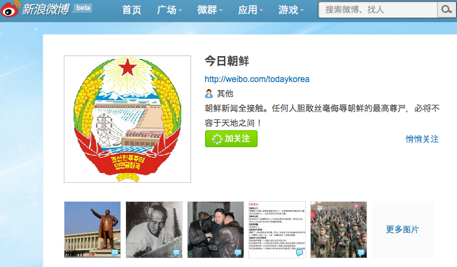 Via Offbeat China, we learned earlier today of Sina Weibo’s hottest newcomer, “North Korea Today” (@今日朝鲜), which joined on March 7 and already has 85,691 followers as of this moment (I was No. 84,403, I think). Its profile reads something to the effect of, “Full access to North Korean news. Anyone who dares besmirch North Korea’s dignity will not be accepted anywhere under heaven” (it’s basically as befuddling in Chinese; Financial Times translated it as, “Anyone who dares to insult the dignity of North Korea will not be tolerated under the heavens!” though I somehow think “besmirch” is more fitting.) Apparently it’s still unclear whether this is a spoof, but if so, it’s the greatest ever — partially because Chinese netizens just haven’t gotten the joke, but also because the rest of us have been given a window into netizens’ opinions of the Democratic People’s Republic of Korea.

Some comments on the North Korea Today account, as translated by Offbeat China:

As Offbeat China writes, “It was welcomed wholeheartedly by surprise, contempt and ridicule. Tweets by North Korea Today received an average of 200 to 2000 comments, with supportive ones very rarely spotted, if at all existed.”

This gives me the opportunity to share my favorite China-North Korea story: in 2007, China stopped sending aid to North Korea because North Korea was stealing the trains on which the aid was being delivered. Financial Times reports:

Absconding with Chinese wagons would be a strange move for North Korea because Beijing is Pyongyang’s closest political ally and biggest provider of food, goods and oil. Analysts monitoring North Korea said Chinese officials had privately complained to them that the North Koreans were dismantling Chinese wagons and selling them back as scrap metal.

This would be funny if it weren’t so, so sad, and the North Korean people so heinously mistreated.