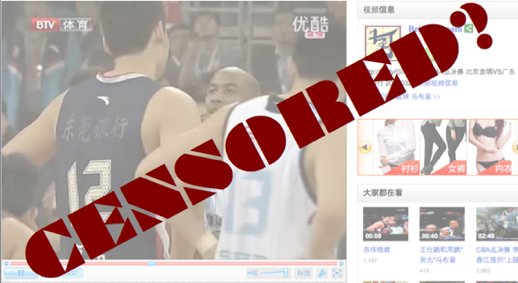 At the 52-second mark of this Youku video, which accompanies yesterday’s post titled “Watch This Dirty, Dirty Foul On Stephon Marbury, Followed By Some Shithead Telling Him, ‘Fuck You,’” one hears a sudden crackling sound before the stream suddenly stops. It doesn’t start again until the 1:45 mark, after China national-team member Su Wei has stopped telling Marbury “Fuck you, fuck you.” In the comments section — which surely would have gotten longer had the offending part not been expurgated after just 2,645 views — people are ripping on Su Wei and Zhou Peng, the player who fouled Marbury. One commenter, rather reasonably, says Su Wei has tarnished Chinese basketball. Maybe that’s why a pencil-pushing censor in Youku’s office stepped in: to restore the reputation of Chinese basketball. By making sure what happened did not actually happen. You hear that, everyone? Su Wei did not actually tell Marbury to fuck off. Except here, on 56.com Ku6.com [Ed.'s note: we'll see if it lasts longer there than on Youku and 56.com], when he does exactly that at the 0:55 mark: