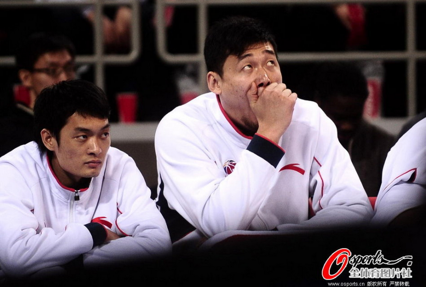 Via NiuBBall, Guangdong’s Su Wei yawning on the bench during Wednesday’s Game 4.

It’s the fourth quarter of Game 5 of Beijing vs. Guangdong, with the Ducks just one win away from the championship. If you watched Game 3 — in which the Southern Tigers shot lights out in the second half to run away with a 111-93 home win — you’d know how badly the Ducks want to seal the deal tonight to avoid playing Games 6 and (possibly) 7 on the road. It’s on CCTV-5 and BTV.

Links for those not watching.

So… the good guy won? “If Premier Wen Jiabao is ‘China’s best actor,’ as his critics allege, he saved his finest performance for last. After three hours of eloquent and emotional answers in his final news conference at the National People’s Congress annual meeting this month, Wen uttered his public political masterstroke, reopening debate on one of the most tumultuous events in the Chinese Communist Party’s history and hammering the final nail in the coffin of his great rival, the now-deposed Chongqing Communist Party boss Bo Xilai. And in striking down Bo, Wen got his revenge on a family that had opposed him and his mentor countless times in the past.” [Foreign Policy]

Tell me again what America does and doesn’t do. “’The U.S. government is involved in espionage against other governments,’ [Richard Clarke, former counterterrorism czar,] says flatly. ‘There’s a big difference, however, between the kind of cyberespionage the United States government does and China. The U.S. government doesn’t hack its way into Airbus and give Airbus the secrets to Boeing [many believe that Chinese hackers gave Boeing secrets to Airbus]. We don’t hack our way into a Chinese computer company like Huawei and provide the secrets of Huawei technology to their American competitor Cisco. [He believes Microsoft, too, was a victim of a Chinese cyber con game.] We don’t do that.’” [Smithsonian, via Digital Trends]

Fight! Fight! Fight! “I had vowed not to post about Shaun Rein anymore, as I thought I had said it all. And then I discover this act of personal character assassination, this smear, and I can’t be silent about that. Rein’s book may become a bestseller but that won’t make him any less of a brat and a hatchet man.” [The Peking Duck]

Corollary: Haven’t heard from the blog Zhongnanhai for a while: How does one become a China expert?

In which Fair Labor Association effects change at Foxconn. “For Western companies, particularly in the consumer technology space, the changes could raise production costs as contractors spend more to ensure labor safety and rights, as well as hire more workers to compensate for reduced hours. Foxconn, which recently increased factory wages by up to 25%, says it will maintain worker compensation, even as it moves to reduce hours worked to be in compliance with Chinese law.” [Time]

Corollary: “Certainly Apple’s sales numbers for the new iPad’s opening weekend don’t seem to indicate a sales slump, but according to the China Business News, sales are definitely down somewhere because something strange is happening to Foxconn workers on the iPad line: they’re getting time off. Lots of it.” [Tech in Asia]

Paper iPhones being sold as offering for the deceased for April 4′s Qingming Festival. “‘We hope the deceased can also feel the progress of our society,’ said a customer who did not give his name.” [China Daily]

Corollary: So it’s okay for Leslie Cheung (RIP) to wear a translucent shirt and feel up his crotch on stage?

Apparently 401 million Chinese are overweight or obese. But in calling China the “fattest country in the world,” shouldn’t we also say it’s one of the skinniest? “China’s weight explosion can be explained in broad terms using three main factors: genetic disposition, decreasingly active lifestyles and changes in diet. The latter two are being exacerbated by increasing rates of urbanization and economic expansion.” [Asia Healthcare Blog]

Manga look in China is “trend,” apparently. “Pics of other young Chinese with “perfect triangle faces” continue to appear online, much to the delight and bewilderment of Chinese netizens as obviously the vast majority of folks don’t look like this. Reactions range from ‘This is great’ to ‘I’m flabbergasted’ to ‘It’s a goblin, and the Earth is in danger.’” [Kotaku]

Hong Huang in Bo Guagua’s defense. “She said that it would be unfair for people to blame Bo Guagua for what his parents had done. ‘It is not necessary to give a son or a daughter an injection because their father or mother sneeze,’ said Huang.” [Want China Times]