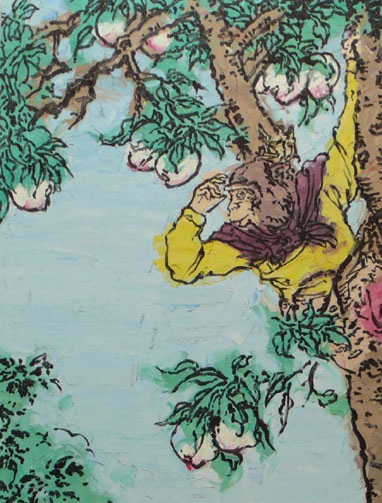 Monkeys do not have opinions on curatorial ethics.

Today Art Museum, a totally unprecedented factory-cum-gallery space (it’s not unprecedented at all), has done us all the favor of cutting back on the galleries to focus on what art lovers really want: posh restaurants and cafes. I could go on along this vein, but this review really isn’t about Today Art Museum, featuring a front-yard sculpture by the shallowest man in Chinese contemporary art, Yue Minjun. No, I’m here to talk about Conversing with the Moon – He Sen’s Solo Exhibition, a quite decent show that opened on February 11, which I would totally recommend you go see if only it were still there. That’s right, it ended less than two weeks after opening. So yeah, thanks, Today Art Museum.

Let’s talk about the monkey.

That particular simian is He Sen’s “Monkey King on the Peach Tree” from 2007. The Monkey King, Sun Wukong to acquaintances, is the sutra-toting rapscallion from the 16th-century novel Journey to the West by Wu Cheng’En, or, to those who can’t read archaic vernacular Chinese (plebes), from the 1980s live-action television show now in relentless syndication. He Sen’s exhibition included several pieces based on Journey to the West, and while these were mostly an excuse for the artist to show off his traditional brushwork and oil skills, they are still awesome because they involve Journey to the West. 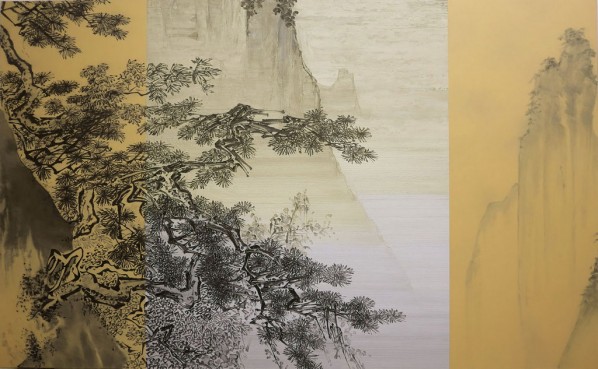 In the above series, He Sen uses oil paint to copy post-Song ink compositions, splitting each canvas into zones of different brushwork styles or tonal fields. The juxtapositions are engaging and playful. They invite semiotic questions of form and meaning and how classic tropes mutate over time, what that says about us and them and whether we can ever really understand what was there in the first place, if there was ever anything there at all. The TV show Journey to the West raised many of the same questions, but in a much subtler way. 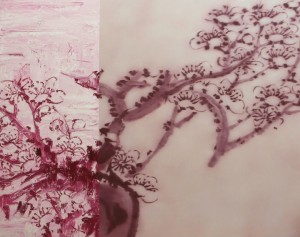 Some have made the terribly wrong claim that He Sen is pioneering a contemporary artform with traditional Chinese culture at its core. These people are probably dull Chinese art historians. If anything, He Sen is commenting on how traditional Chinese art symbols fail to resonate with contemporary audiences because they represent a foregone culture that can’t be recreated without getting our grubby little modern-day fingerprints all over it. His creations are also just really pretty. The pink pastels look like cake frosting.

The artist’s earlier works were on the second-floor exhibition hall. I’d guess the curator (rightly) assumed most exhibition-goers wouldn’t care enough to climb a set of stairs. Of these pieces, the press release says ([sic], obviously), “The decadent and sophisticated female figures portrayed were the most fierce and literal expression to confront impact of mainstream cultural trends of the time, especially the anxiety and void in those images projected the artist’s psychological response to that particular context.” I’d call them excuses to paint his squeeze’s barely unexposed vagina. 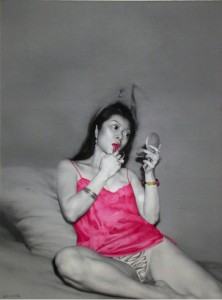 He made dozens of these, and they sell for tens of thousands of dollars apiece. I can actually picture the sleazy Shanxi coal baron who buys and subsequently jerks to this painting. They’re certainly not good for much else.

You could have gone to see “Conversing with the Moon – He Sen’s Solo Exhibition” before it was inexplicable shut down two days early on February 22. You can still watch the greatest TV series known to man though:

One Response to “Guy On Art: He Sen’s Short-Lived Exhibition Showcases Journey To The West, Women In Undergarments”