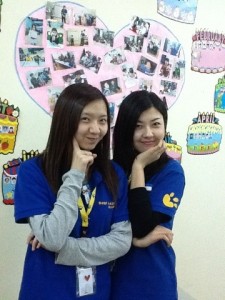 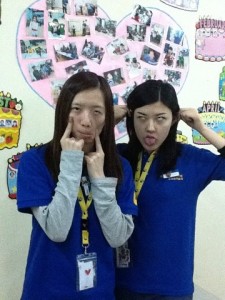 In addition to their indisputable beauty and mastery of funny faces, fellow English teachers Sissi and Vicki have much in common. To begin, both have favorite foods that I had never heard of: Sissi loves “liulianguo” while Vicki loves “shanzhu.” After a heated debate about the existence of these fruits and possible translation errors, a Google search revealed that liulianguo is the durian, a spiky, yellow-green, four-pound basketball of a fruit whose smell is somewhere south of sewage, while shanzhu is mangosteen, which, far from being Bruce Springsteen’s seventh-grade science experiment gone wrong (as one co-worker suggested), is in fact “the queen of tropical fruits,” according to its own website, mangosteen.com.

Beyond obscure fruits, Vicki and Sissi also share a love of Beijing. Sissi grew up in Zizhu’an Hutong and fondly remembers a childhood spent playing with her family and neighbors. Now an adult, she loves sitting in cafes during rainstorms and enjoying the sunshine in the local parks. In her free time, she pursues guitar and tango lessons. She cites meeting her husband as one of the most exciting moments of her life (they were fellow teachers at Wall Street English).

Also a native of Beijing, Vicki has always loved this city’s rich historical legacy and its many ancient buildings. A photography aficionado, she loves taking pictures, going on walks, singing, and thinking. She recalls the most exciting event of her life being her time spent studying finance at the British Columbia Institute of Technology in Vancouver. She loved the Canadian beaches, but disliked how all the shops closed after 7 pm.

Both Sissi and Vicki currently teach at Best Learning in SOHO Shangdu, one of many private English-language companies that have sprung up throughout the city. Each day they work alongside foreign teachers to co-lead classes of students ranging from 2 to 12 years old. They were inspired to pursue teaching by a love of children.

Finally, Sissi and Vicki share high hopes for the future. When asked about their dreams for life in ten years, both women said they hope to still be in Beijing, earning money, and enjoying happy marriages with two children (a boy and a girl).

One Response to “Meet A Chinese Person (x2): Vicki and Sissi”

Leave a Reply to Nick