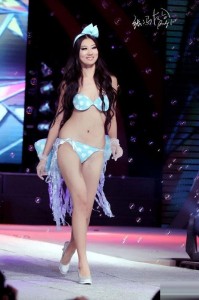 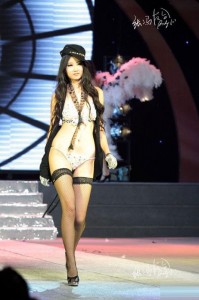 Via Shanghaiist, students from the Chengdu University of Technology put on a fashion show.

The Beijing Ducks play at home vs. Shanxi in Game 2 of the CBA semifinals. Why not read links while the game’s on?

To editors out there still considering the paid subscription model for your online content, this is why you don’t do it. The South China Morning Post broke a pretty big story this afternoon about Wang Lijun being “branded a traitor by Beijing.” But you know what site readers of this will find themselves when they click this? The Shanghaiist. That’s because SCMP offers one paragraph before asking you to pay $51.50 for a year’s subscription (have you not heard of ads?), while Shanghaiist offers three grafs. Yeah, something is wrong here. [SCMP via Shanghaiist]

Too hot for the sculpture garden. “A collection of life-size sculptures depicting nude couples in suggestive positions remained covered by cloth on the rooftop garden of a five-star hotel in the city for a second day Tuesday, weeks after complaints first surfaced about the ‘offense against decency.’” [Global Times]

“Refrigerator” is still the best name I’ve heard though. “I wondered why a colleague in our advertising office would call himself ‘Billboard‘ Kwok. Or why my slightly heavyweight boss called himself ‘Beef‘ Chen. Or why the advertising creative team donned such names as ‘Jesus‘ Yeh and ‘Devil‘ Zhou , and in case you had a question, you could ask for the Creative Director, ‘If‘ Chen.” [the Beijinger]

Awkward because Deng Xiaoping’s family and Bo Xilai’s were on opposite sides during the Cultural Revolution, sorta. “The young man wheels Deng Pufang, son of the late Deng Xiaoping, past a nervous-looking Chongqing Committee Secretary Bo Xilai.” [China Digital Times]

Alicia, who sent the link, asks most pertinently: What are you going to do with all those seeds? “The Tate has acquired approximately 8m individual sculptures, its largest number of works of art ever, although each is smaller than a little finger nail: 10 tonnes of Ai Weiwei’s famous porcelain sunflower seeds.” [Guardian]

The most comprehensive list of “2012 Blogs By Western Women Who Love Chinese Men”: Jocelyn Eikenburg has it. [Speaking of China]