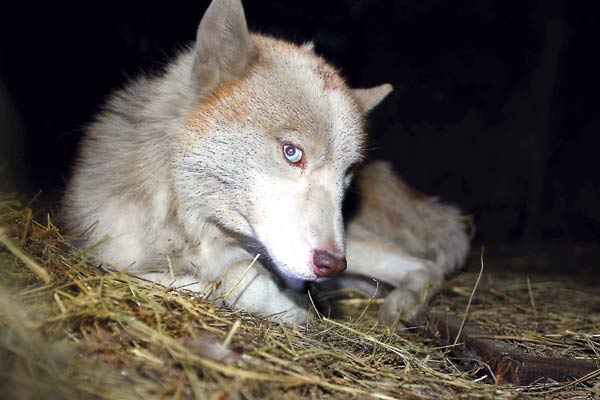 This is not a wolf. Via China Daily.

Beijing is up 3-1 in its best-of-seven series with Guangdong after winning tonight 107-98. The Ducks play again at home — for the last time this season — on Friday with a chance to clinch their first CBA championship.

“Life itself is the process of committing suicide.” “A delayed-release microblog post on Sunday, sent by a college student, who called herself @Zoufan on her Weibo.” [Global Times]

“British citizen Nick Heywood was found dead in Chongqing in October, 2011. The Chinese officials decided Heywood would die of alcoholic poisoning (drunk), however his friends pointed out he had never drank before. While many foreigners had their first glass on their trip to China, because of the culture of binge drinking, the incident would certainly draw attention from stake holders.” [Seagull Reference]

“Suspicions about Mr. Heywood’s death were raised by Wang Lijun, the former Chongqing police chief who triggered the political drama, The Wall Street Journal reported Sunday. Mr. Wang, who sought refuge from Mr. Bo in the U.S. Consulate in Chengdu on Feb. 6, claimed to have fallen out with Mr. Bo after discussing with him his belief that Mr. Heywood was poisoned, according to people familiar with the matter. He also claimed Mr. Heywood had been involved in a business dispute involving Mr. Bo’s wife, Gu Kailai, according to one of those people.” [WSJ]

“By last night, Mr Heywood’s name was being wiped by the censors from the Chinese internet, adding to the mystery surrounding the case. In Chongqing, no one admitted to any knowledge of Mr Heywood’s case. The local government and police both swore no knowledge of what had happened. At the time, unusually, his death was not reported in any media.” [Malcolm Moore, who's currently in Chongqing, The Telegraph]

“However, his family in the UK appeared to dismiss any suggestion of foul play. ‘My son died of a heart attack. I don’t know why there’s all these rumours. But I don’t want to say anything else,’ his mother Ann, speaking from her home in Streatham, south London, told ITV News.” [Tania Branigan, The Guardian]

Are we supposed to be surprised? “Since Mr. Bo was fired last month after a scandal involving his police chief, a starkly different picture of his sweeping campaign to break up organized gangs — called da hei, or smash black — is coming into focus. Once hailed as a pioneering effort to wipe out corruption, critics now say it depicts a security apparatus run amok: framing victims, extracting confessions through torture, extorting business empires and visiting retribution on the political rivals of Mr. Bo and his friends while protecting those with better connections.” [NY Times]

How much is enough? “In fact, even in Beijing and Shanghai, a job that pays 4,000 yuan a month is highly sought after by college graduates. // But is 4,000 yuan really enough to tide a Beijinger or a Shanghainese over from the previous payday until the next? Hardly. Even a man making 10,000 yuan a month, who is the envy of most city dwellers, can be complaining about running short of money all day.” [Ministry of Tofu]

Among other reasons… “Why has real-name registration not done more to chill speech? // 1. The perceived ‘price’ for free speech online is low.” [Tea Leaf Nation]

20 years? “Xu is convinced that China’s education system lacks behind more Western countries such as America. That is why his former company, New Oriental is built upon sending Chinese overseas to study and broaden their perspective and almost discover themselves. However as China’s economy booms, this trend of going overseas is starting to slow. At the end of the talk, I asked Xu Xiaoping, ‘How long will it take until China has to keep sending students overseas to become really creative and innovative?’ He replied ‘At least 20 years.’” [Technode]

But how will we keep score without a scoreboard? “I’ve got a completely nutty idea. Let’s stop keeping score and comparing ourselves to the other guy. Perhaps a better set of metrics for U.S. commentators to worry about are domestic unemployment, domestic income inequality, domestic life expectancy, domestic poverty rates.” [Stan Abrams, China Hearsay]

You don’t spend that much time trolling the web. “Here at China Beat, of course, we spend a lot of time trolling the web for great commentary on China… we wanted to call special attention to two new blogs and one reinvigorated podcast whose RSS feeds are worth grabbing.” But no Beijing Cream. *Sad face* [The China Beat]

“PLA wipes Internet after Bo Xilai’s son reverses Ferrari over migrant worker on ‘If You Are The One.’” [China Daily Show]