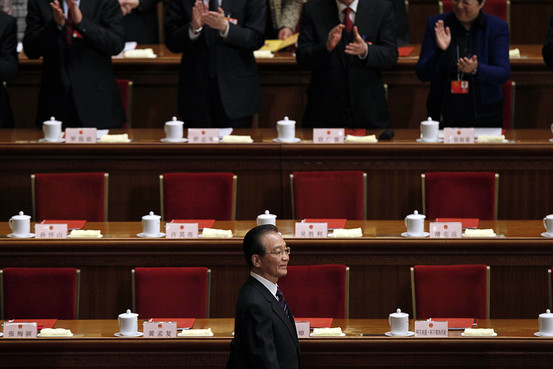 In the man’s own words: “The new problems that have cropped up in China’s society will not be fundamentally resolved, and such historical tragedies as the Cultural Revolution may happen again.” [Wen Jiabao, as reported by Guardian]

A thorough takedown of Han Han. “An ignorant and incompetent writer, Han Han has gone so far as to be admired as a talented adolescent, a bestseller writer, an advocate of democracy and freedom, a social and government critic, and a public intellectual (公知, yet another stigmatized Chinese term after 小姐, Miss, young lady, which now often means a prostitute; and 同志, comrade, which now can mean gay men.). His ascent reflects the distorted values of the present-day Chinese society, in which fake, attractively packaged and effectively promoted, sells well as thereal McCoy to the unsuspecting consumer.” [Huo Long on Just Recently]

The robber with a heart of gold. “After Xiao Liu got her bag back the robber even called her and ask, ‘Do you want your cell phone back?’ Xiao Liu was surprised to see all diplomas back and intact and felt fortunate even though the whole thing was unfortunate, so she told the robber generously, ‘forget about the cell phone, its yours now.’” [China Hush]

Li Na plays for herself. “The outspoken Ms. Li got into more trouble the other day in an interview when she basically said that she isn’t busting her ass on the tennis court because she’s representing her country. She’s a pro and is in it for herself.” [Stan Abrams, China Hearsay]

“Big picture” stories like this are the lamest, but this one has a bit of heft. “Making matters worse, according to a survey conducted by the All-China Women’s Federation — again, the organization founded to further women’s rights — out of 30,000 men, more than 90 percent said women should marry before 27 to avoid becoming unwanted. This stems partly from beliefs about the prime years for bearing children, but mainly, from the value that Chinese men place on youth and looks. While they’re hardly the only men in the world to do this, they are rather unforgiving.” [Salon]

Some Norwegian in Chengdu seeks your help. “Within a day of its posting to video-sharing site Youku, the video received 1,500 comments, some ridiculing and others questioning whether the police force would use heavy resources in attempting to help what they viewed as a petty ‘foreign traveler problem.’” [Go Chengdoo]

Second Corollary: Another look [Behind the Wall, MSNBC]

Finally, if you still haven’t heard…

Youku and Tudou are merging. [Reuters]

Here’s Eric Abrahamsen trying to close his Bank of China account: “Armed with most of the paperwork I’ve produced in my 34 years of life, I approached the window and stated my intent, searching the teller’s face for the slight crease of the brow and shake of the head that would signal the inevitable. She stared intently at her screen, the minutes lengthening. // I couldn’t help overhearing a British man next to me in the midst of a breakdown. For reasons he could not fathom they would only let him withdraw half the amount he wanted; he would have to wait until next week for the other half. But why? And why did they need yet another photocopy of his passport? And what exactly were they doing with his money?! Mounting rage began to derail his otherwise fluent Chinese. I admired his principles, but wished I could whisper to him: peace only comes to those who abandon hope.” [Latitude, NY Times]