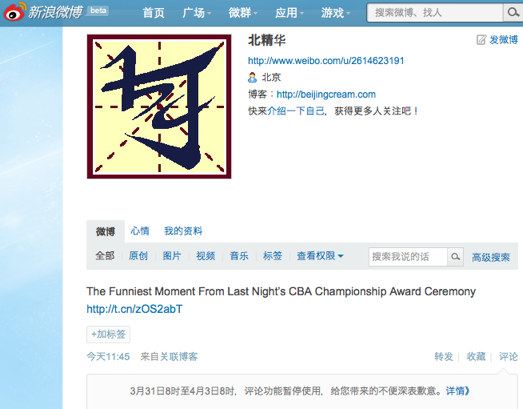 The ripples from those stupid coup rumors two weeks ago are finally hitting shore. You remember, right? Those stupid, stupid rumors in which Bo Xilai’s faction was supposedly overthrowing the CCP? We called it “tanks vs. Ferraris.” Authorities were at first mum about this scuttlebutt, but of course they couldn’t let it go unpunished. As of now, six people have been arrested and 16 websites shut down, according to BBC, and Sina Weibo has been punished for not being more proactive in its censorship, slapped with a 72-hour freeze on its commenting function. This move has real-world implications, too. Our own RFH, working on a story about Internet freedom, has seen sources cancel interviews with him earlier this morning. “And the reaction becomes the story,” writes Rectified.name. Or perhaps: reality mirrors satire (China Daily Show: “PLA wipes Internet after Bo Xilai’s son reverses Ferrari over migrant worker on ‘If You Are The One’”). And another messenger bites the dust.

After the jump, a collection of reactions from the blogosphere as of this moment, plus a way around the commenting block. (It’s easy: just “forward” instead of “reply.”)

According to a Xinhua report from late Friday evening, a spokesman from China’s National Internet Information Office has announced that several internet companies, including Sina (NASDAQ:SINA) and Tencent (HKG:0700), have been legally punished for permitting the spread of unfounded rumors.

Today, attempts at commenting on Sina’s popular Weibo site receive the following message: “3月31日8时至4月3日8时，微博评论功能暂停使用，给您带来的不便深表歉意.” (From 8:00 March 31 until 8:00 April 3, the Weibo commenting function has been temporarily suspended, we deeply apologize for any inconvenience this has caused you.)

Netizens have already begun mocking this measure. Here are three posts that are fairly representative of what many Weibo users are saying on the issue: // “Good for you! For the next three days nobody can criticize my posts.” // “…Now I’ll just switch to the ‘Forward’ function…” // “Is this a big April Fools joke?”

Does it mean that everybody using Weibo in China has to be put on mute? Not exactly, because for whatever reason, the government chose to block comment, instead of re-tweet, to prevent the spread of rumors on Weibo, which is counter-intuitive, but leaves room for people’s voices still to be heard.

Tencent Weibo has a similar announcement on its website. But both microblogging services have kept their post and repost function intact.

Sina Weibo: Hey Twitter, how did you keep your government’s hands off you?

How are wumao going to make money if they can’t leave comments for the next few days? Why didn’t anyone consider their feelings?! Wumao have been ‘innocently’ punished by association.