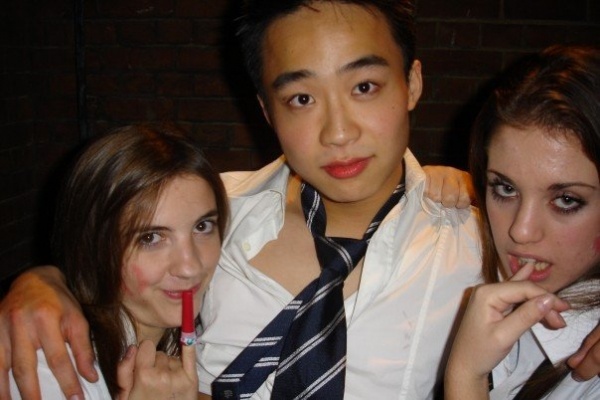 Bo Guagua, via China Digital Times (link below on his name)

I first learned of Sunday’s Ferrari crash in Beijing two nights ago and didn’t think much of it until The Atlantic’s James Fallows wrote about the incident earlier today. My only question had been: Who drives fast enough on a completely deserted ring road at 4 am and crashes? The answer: probably someone very rich and very out of it. So… Bo Guagua?

There are quite a lot of these very rich head cases in central Beijing, and they’re prone to meltdowns and public blow-outs. But Chinese police regularly refuse to comment on their “ongoing cases,” just as they’re not likely to comment on incidents where formalities have yet to be resolved. Unfortunately, this creates a fertile ground for rumors to proliferate.

The old joke about how it seems to be a “sensitive time” almost all the time in China has never seemed truer. With Bo Xilai under arrest, powerful military interests are swirling, people say. Take as an example the 14th army, a military unit set up by Bo’s father, Bo Yibo, headquartered around the sensitive border area in Yunnan and Tibet. Bo Jr. was visiting this unit in February when a reasonable man might have expected him to be in Beijing or Chengdu, preparing to combat Wang Lijun’s allegations against him. Could Bo have been drafting contingency plans?

Too far, you say? Not for Epoch Times, which ran a “breaking news” piece earlier today based entirely on vague rumors from Chinese microbloggers. Apparently a military coup was staged last night in Beijing, with Hu Jintao and Wen Jiabao on one side against Bo Xilai and Zhou Yongkang. Tanks vs. Ferraris.

But I prefer dealing with reality — the interesting reality of state media, for example. Sunday’s crash reminds me of a story by Global Times in July 2010 about an issue of GQ China featuring a withering and in-depth rebuke of princelings – wealthy young brats – who drive fast cars, have studied abroad and generally appear vapid, reckless and completely out of touch with the real world. The GQ reporter interviewed members of some hideous enclave called the Super Car Club and allegedly used quotes meant to stay off the record.

The July issue was “voluntarily” yanked, and one of GT’s then-reporters, Li Shuang, wrote a front-page Metro Beijing story about the sorry tale. The following day, all hell broke loose – again – as the owner of SSC called various editors at the GT office to demand an apology, while threatening all manner of extrajudicial repercussions. Although the editors and reporter stood by the article, it was later removed from the website, though the newspaper itself was not recalled.

Li and the Global Times actually broke the story, but due to the newspaper’s arse-backward policies, they didn’t really get the credit they deserved. The point is: papers like GT often get away with reporting on controversial topics because they are slightly off-center of the propaganda department’s radar and because they are also entirely not staffed with mindless drones (though there are certainly a few of those). GT comprises young, inquisitive reporters and  (some) managers with a largely Western sensibility toward reporting what they can, within a straitjacket they neither appreciate nor fully anticipate.

And like it as not, when redoubtable reporters like James Fallows write about Global Times in rather excitable terms – “It is hard to believe that the story will stay up very long,” he writes, though it’s been nearly 17 hours and the story is still up – they can (semi-)unwittingly condemn both the story and any real progress. It’s a bind: Chinese-based journalists cannot ignore these kinds of stories and commentaries, but by spotlighting them, they doom state media outlets (and their earnest ambassadors) to a continued grim hidebound existence that makes such Weibo-led “scoops” as a car crash both unusual and newsworthy. One can’t ignore the fact that it’s a situation that suits the Western press quite nicely – far less so for the ignoble Chinese reporter who ends up paying the price.

3 Responses to “Revving The Rumor Engine, And A Defense Of Global Times”