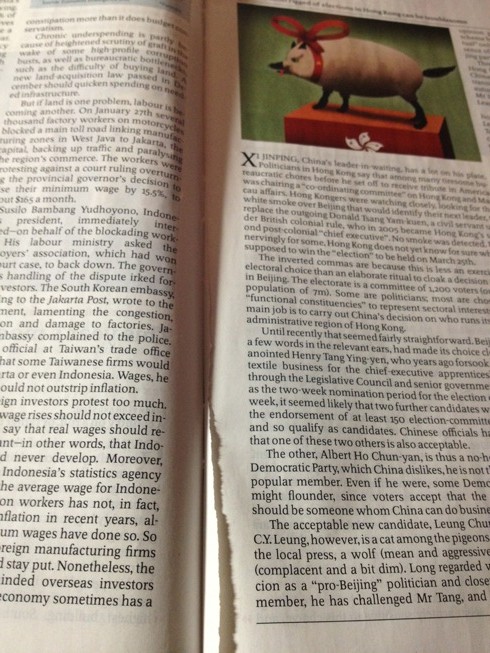 In the January 28 issue of The Economist, the editors wrote: “In this issue we launch a weekly section devoted to China. It is the first time since we began our detailed coverage of the United States in 1942 that we have singled out a country in this way.” Two weeks later, BJC reader Anlicia picked up a copy of the February 18 issue from Page One, a reputable book store in Beijing’s central business district, and found that someone had ripped out the article “Grappling in the dark” regarding Chongqing party secretary Bo Xilai and Wang Lijun. Of course the country might have censored Internet searches of Wang Lijun’s accusations against princeling Bo (though coverage has been remarkably skittish, as various factions jockey to align themselves for or against Bo’s “Chongqing mafia“), but hard copies of magazines?

We understand the issue’s already a couple weeks old, but we wonder if someone really wanted to read that article, or if they didn’t want anyone else reading it. Several of our friends have heard of pages getting ripped out of magazines before, and of course there’s the practice of hiring goons to clear newsstands of offending publications, but as to this particular case? Similar encounters, anyone? tips@beijingcream.com

One Response to “Does Anyone Know What Happened To Pages 25-26 In The February 18 Issue Of The Economist?”