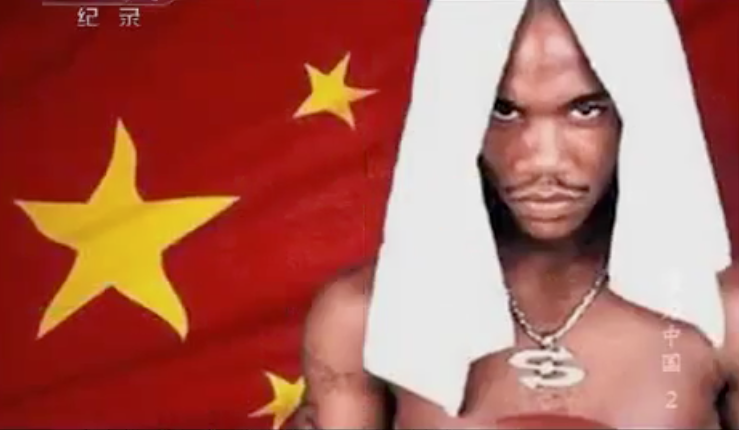 The video after the jump depicts a Stephon Marbury unlike any you’ve seen. At 35 — currently winding down his third and best season in the Chinese Basketball Association (he just scored 52 and 53 points in consecutive games in the CBA semifinals, against his former team, the Shanxi Zhongyu Brave Dragons, no less) — he’s briefly shown on the bench at practice reminiscing about the time when he was 18, catching lobs at Georgia Tech. “I’m talking about how fast it went,” he says. “Damn.”

Let’s briefly stop here and lay our cards on the table: the 24-minute video, produced by China Central Television, is the definition of a puff piece, complete with the background cello music and the wizened (OK, middle-aged) journalist telling campfire stories about his exclusive with the superstar; it uses a motif most producers would be clubbed to death for trying: that Marbury arrived in Beijing after he dreamed he would; and Marbury’s on-camera answers in his sit-down interview seem completely disjointed from the producers’ narrative, which is as hackneyed as you might expect: fallen star gains new perspective on life, even has tattoo of his Chinese name on his forearm along with “I <3 China.”

But watch it anyway, because under the duff is an actual portrait of Stephon Marbury. He takes the subway to work. He does tai chi. He treats his teammates and coaches to hotpot. This isn’t mentioned in the video, but he writes a column for China Daily, and in his first season in Beijing, he’s led a team that has missed the playoffs in four of the last five years to within one game of the CBA finals. I realize the whole “Marbury has found inner peace” storyline has been written by the likes of Wells Tower and William C. Rhoden, but… check out the video anyway. It’s in Chinese, but I’ll guide you non-Chinese readers through it.

Sina video for those in China at the bottom.

We begin with footage of Marbury in the NBA. In his final season, the narrator tells us, he made 23 million US dollars, the richest contract in the NBA.

Marbury said he equated signing with Beijing before this past season — after one year with Shanxi and another year with Foshan — with signing his first NBA contract.

When he left for China, the American media thought he had gone crazy. Titan Sports assistant editor-in-chief Yang Yi (you’ll see him again) says: “When Marbury signed in China, this is how American media described it: ‘Marbury will pollute that environment.’”

A pivotal game in December: Beijing trails Xinjiang — CBA runners-up three years running — by one, 97-96, with less than a minute to go. The crowd calls for Marbury…

Marbury’s nickname, Lone Wolf, was a Chinese invention. Asked about it, he says, “No one calls me that in America.”

Marbury played for the Timerwolves before leaving in ’99. He was given the nickname Lone Wolf because he left his good pal Kevin Garnett and he was a Timberwolf. The fact that he was later criticized for being selfish has nothing to do with it.

He lives at the posh Oriental Plaza in Wangfujing and takes the subway from Dongdan station up to Fifth Ring Road, where the Beijing Ducks practice. Oh, he does tai chi in the mornings and has a forearm tattoo that says 马布里 — Ma Bu Li, his Chinese name.

He finds the same people on the subway train, he tells Yang Yi, who tells CCTV producers, who essentially tell us. “Every day I ride the subway just like them,” Marbury apparently told Yang. “I’m part of the city like they are.”

Yang retells the infamous saga of Marbury’s fallout with Isaiah Thomas, when Marbury’s dad suffered a heart attack during a game and no one bothered to inform him until after the game. “I could no longer trust these people,” Yi says Marbury said about the people in New York.

Juxtaposition: his coach in Beijing?

“Good. Coach is cool. He’s kinda smooth with his ways of how he does things because his preparation towards getting better is conditioning.”

Something is left unsaid here: conditioning sucks. Every foreign player in the CBA will tell you there’s too much conditioning. Except this story can’t include any of those type of opinions.

The team’s sponsor’s boss is at practice. With Marbury, expectations are only increasing, the narrator says. “Even if they called you a strong team before, you wouldn’t have believed it.”

The Beijing Ducks are sponsored by a company called Shougang, and its Deputy Secretary, Xu Jianguo, makes a speech. “Protect fourth place. Translate this well, especially for him [Marbury]. Compete for third. Sprint for first.”

The narrator worries out loud about whether Marbury is used to these type of lectures.

“Yes I am used to it now,” Marbury says. “I don’t know what’s being said, but I’m used to being there. My translator asked me, Do you want me to translate? I was like, No, you don’t have to, that’s OK.”

The journalist is back, and here we revisit the motif of “the dream” (sorry, it was mentioned earlier, maybe twice).

The journalist says Marbury told him that while he was at Foshan, he dreamt he would score 50 points in front of a home crowd in Beijing. (I should mention here that I attended last year’s Foshan game in Beijing, with Marbury playing for the visitors. I was trying to get drunk. It just occurred to me that I didn’t even blog about it afterwards like I had meant to. Beijing won is all I remember.)

A Ducks player says that Marbury is like a big brother and mentor.

December 2, 2011: XINJIANG GAME. China national team coach Bob Donewald is Xinjiang’s coach (before he was fired), Kenyon Martin is still there (before he negotiated out of his contract).

Beijing is up 10 at the half, then extends the lead to 21. But Xinjiang claws back and leads 97-96 with 28 seconds remaining.

Ducks captain Chen Lei texted journalist Yang Yi (there’s that man again) after the game, according to Yang Yi, and said when they were up four with five or six minutes left, had it been another year, they wouldn’t have thought they could win.

But this time, with Marbury, they felt they couldn’t lose.

Chen Lei’s two free throws gave Beijing the lead, and then Beijing plays some nice defense around the bucket, Marbury ends up with the ball, and a couple passes later, time’s expired.

Marbury is the talk of Beijing.

“I look at myself as a child growing in China, and my life here I think being a part of the culture has definitely allowed me to feel something totally different,” he says.

“Some dreams do come true.”

Note: any discrepancies in chronology and “fade” placement are my fault alone. I blame illness and fatigue. Will polish in the morning.

5 Responses to “The Rebirth Of Stephon Marbury”