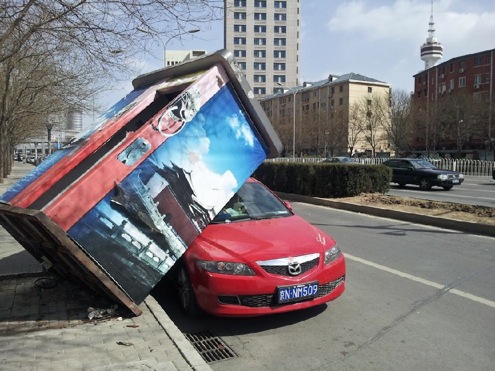 Sorry this is late. I tried to beat my self-imposed midnight deadline but failed. Blame time itself, immemorial. Links! [Ed's note: uh... this was posted ~12:30 am on March 27, accidentally backdated to March 26 @11pm. #WorthlessDisclosures]

Chinese science fiction: “Han Song predicted the destruction of the Twin Towers a year before 9/11. // In his novel ’2066: Red Star Over America,’ Han, China’s premier science-fiction writer, depicts a disturbing future. It is the year 2066. China rules the world while the U.S. festers in financial decline and civil war. A team has been sent to America to disseminate civilization through the traditional Chinese board game Go. But during the critical Go match held at the World Trade Center, terrorists strike.” [LA Times, via Paper Republic]

What awaits CY Leung, Hong Kong’s new chief executive. “Leung isn’t entirely without public support, however. The son of a police officer, he is seen as a self-made individual who fulfilled the Hong Kong dream — parlaying modest origins into a fabulously successful career in real estate and a 12-year stint as convener of Hong Kong’s Executive Council, the government’s policymaking body. Despite fears that Leung is Beijing’s man, many have high hopes for his plans to tackle Hong Kong’s two main social ills: unaffordable housing and a wealth gap that is the widest among the world’s developed societies.” [Time]

A new twist on a classic meme. “Who is Hu?” [Tea Leaf Nation]

At least one of these Du Fus you have never seen, I can promise you that. “Netizens have fun with photoshopping portrait of ancient Chinese poet.” [Ministry of Tofu]

Your Bird’s Nest interlude (look what they’ve done to it!):

The Beijing Ducks’ most valuable non-foreigner has played 142 out of 144 possible minutes over the first three games of the CBA finals. [NiuBBall]

Weddings are the worst… unless they have an open bar. Oh, or if it costs 70 million yuan. [China Smack]