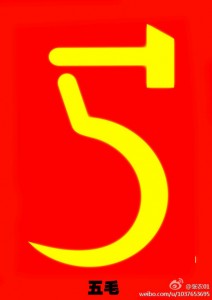 Via Global Voices, Sina Weibo user Zhang Nong created the above as a challenge to the “50 Cent Party,” the term for China’s cyber gang of ultranationalist goonies who spout pro-Party propaganda on Internet forums and comments sections.

Let us read links on this beatific Lei Feng Day!

Ian Johnson’s interview with Ran Yunfei: “Everything they teach you to admire is jiade (fake). Right now they’re pushing Lei Feng (the Communist hero who was a model of selflessness) again. But everyone knows that Lei Feng is made up. All of their model heroes are false: Wang Jie, Liu Wenxue, Lai Ning: fake fake fake. So when they teach morality their teaching tools are fake. Completely fake. After a while the students learn that Lei Feng is a fake. He existed but all the stories are made up. It’s destructive—it destroys everything you’ve been taught. You feel that nothing is real. How can they teach virtues? It’s impossible. The problem is they don’t have a bottom line. There is no bottom line in society. You find out that the things you’re supposed to admire the most are untrue. So it seems nothing is real. So the only way the party can succeed is by cheating you. That becomes their biggest success. That’s who you’re ruled by.” [The New York Review of Books]

This isn’t silly at all. “Police have barred a university student behind the mainland’s Occupy Men’s Toilet Movement from leaving Beijing for the next two weeks, with the authorities wary of grass-roots gatherings during two key annual meetings in Beijing. // Li Maizi, who lives in Beijing, organised the movement in Guangzhou, Zhengzhou and Beijing last month with the help of local volunteers to protest about the longer wait endured by women due to a skewed ratio of public toilet cubicles for men and women.” [South China Morning Post]

Free CGC. “So Mr Chen’s supporters have changed tack, creating an artistic and subversive campaign designed to ‘go viral’ over the internet. More than 4,000 of the bumper stickers have been handed out. Spray-painted graffiti of Mr Chen has begun to pop in Chinese cities. // A flash mob of romantic couples, all wearing sunglasses like Mr Chen’s, appeared at the beginning of December in the main square in Linyi, unsettling the police enough to result in a group detention.” [Malcolm Moore, The Telegraph]

Anti-shark fin soup campaign gaining traction? “The campaign was initiated last year by basketball legend Yao Ming, who said ‘there is no reasonable explanation for the cruelty.’ // Many restaurants and hotels have already followed suit and taken shark fin off their menus.” [China Daily]