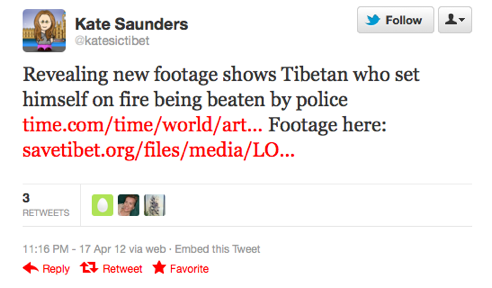 It’s after the jump. You’ve been warned about graphic content.

Video of monk setting himself on fire is here.

Time’s (AP) write-up of the incident is here:

The Washington-based International Campaign for Tibet says the 45-second video it released Tuesday shows the self-immolation of Losang Jamyang in January in the west China town of Aba.

The footage shows a crowd gathering around a man who suddenly explodes into flames and leaps around. Riot police close in, and an officer uses a pushcart to knock the man down. Other police seem to kick the man after he falls and then blast him with fire extinguishers.

Thirty-two people have set themselves on fire in Tibetan areas over the past year to draw attention to China’s restrictions on Buddhism and call for the return from exile of their leader, the Dalai Lama.