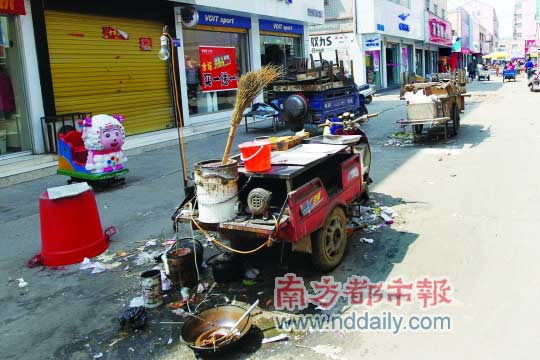 Here’s something you don’t see every day in China: an apparent manslaughter/homicide involving a gun. Unfortunately, what’s disturbingly common are disputes involving the relative of a government official and the laobaixing – “the people” – and this story’s got that.

Last Thursday, the son of a county-level cadre in Dancheng county, Henan province shot and killed a mutton kabob vendor, according to a story in yesterday’s Beijing Daily. Someone from the county’s information office confirmed to the journalist that the shooter was the son of county official Zhao Aimei.

Apparently the victim was Cao Wujun, and had been selling street food for 30-plus years.

There are differing accounts of what exactly happened, though by this point in the article, the journalist is randomly surveying netizen comments, and we know how reliable they are (hey, I heard they’re attempting another coup in Beijing). Was it the son who was shot? Was it the vendor who did the shooting?

Adding to the story, Cao had apparently just torn down his old house and was going to build a new one with his wife.

Expect this story to continue making the rounds. More information, surely, will become available, unless the son did actually shoot the man, in which case, expect everything to be swept under a rug somewhere, only to be uncovered by netizens before going viral. I think that’s how the news cycle works in China.