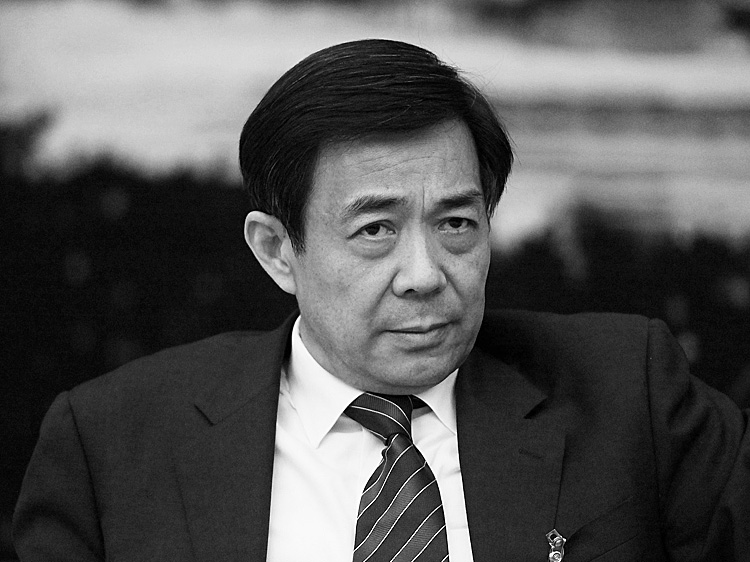 Over the past month, there’s been a lot of smoke regarding Bo Xilai, some of which we’ve been happy to fan here, but when it comes to Chinese politics and media, you know there’s definitely a fire when that smoke is being blown by none other than Xinhua.

A little more than an hour ago, the official news agency of the People’s Republic of China released a terse 98-word statement that’s more damning than all the hundreds of thousands of words spent on Bo Xilai over the last month combined (H/T: RFH). Here‘s Xinhua’s first statement in full (Chinese only), essentially saying that in accordance with relevant provisions under China’s constitution, Bo Xilai’s membership to the CPC Central Committee Political Bureau and the CPC Central Committee has been suspended, and he’s under investigation. Here’s Xinhua’s second statement, in English, with this part:

According to reinvestigation results, the existing evidence indicated that [Neil] Heywood died of homicide, of which Bogu Kailai and Zhang Xiaojun, an orderly at Bo’s home, are highly suspected.

Bogu Kailai and Zhang Xiaojun have been transferred to judicial authorities on suspected crime of intentional homicide.

There you have it. In China, where political scandals are nonexistent, that this one has been allowed to exist and now — it seems — allowed to explode is proof that someone important knows something. One gets the sense that some important decision-maker decided it would be best for Xinhua to break this story lest they get scooped by a third party — heavens forbid a party outside China.

Every media outlet is on this story. In no particular order, a small sampling:

“Comrade Bo Xilai is suspected of being involved in serious disciplinary violations,” said the news agency said, citing a decision by the central party leadership, which decided to suspend Bo from its top ranks.

“Police set up a team to reinvestigate the case of the British national Neil Heywood who was found dead in Chongqing,” Xinhau said in a separate report, referring to the sprawling southwestern municipality where Bo was party chief until he was dismissed in March as a scandal surrounding him unfolded.

“According to the reinvestigation results, the existing evidence indicates Heywood died of homicide, of which Gu Kailai and Zhang Xiaojun, an assistant in Bo’s household, are highly suspected,” said the news agency, citing a dispute over unspecified “economic interests” between Gu and Heywood.

Heywood was initially said to have died last November of an overdose of drinking in his hotel room. But Xinhua said late Monday that a police team’s “reinvestigation” of Heywood’s death found that Bo’s wife, Bo Gu Kailai, and Zhang Xiaojun, a staff member described as an “orderly” at Bo’s home, “are highly suspected.”

“According to investigation results, Bo Gu Kailai, wife of Comrade Bo Xilai, and their son were in good terms with Heywood,” Xinhua said. “However, they had conflict over economic interests, which had been intensified.”

“Bo Gu Kailai and Zhang Xiaojun have been transferred to judicial authorities on suspected crime of intentional homicide,” the Xinhua article said.

According to one person who said he was briefly shown a copy of information for party officials that was circulated on Tuesday, Mr. Bo was faulted for several disciplinary transgressions, including failing to oversee underlings, a reference to Mr. Wang, and mismanaging his family, a reference to the Heywood case. He was also cited for violating organizational principles for not carrying out directives from the leadership in handling the two cases.

“It said that Bo had made decisions arbitrarily, without authorization,” said this person, who also declined to be named because of the sensitivity of the matter.

He said that the document also referred to “other problems” related to Mr. Bo that were found in the process of investigating his wife in the Mr. Heywood’s death.

Sometimes, we complain — rightfully — about our political scandals involving non-essential issues like tweeted pics or affairs or what have you. This is not that kind of scandal. This one involves one of China’s princelings destined for the country’s highest ruling body making the steepest of falls. You can pull out the Icarus analogies, but are they necessary? Bo Xilai is potentially implicated in the alleged homicide of a foreign national. There. There’s your story. Go run with it. 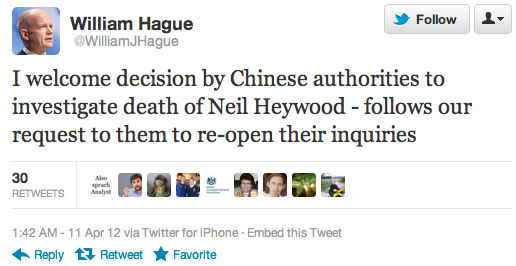 5 Responses to “Bo Xilai Is In Big Trouble, And Yes, It Is Because Xinhua Says His Wife And Aide May Be Linked To Neil Heywood’s Death”