[Editor’s note: what follows is the first in a series of diplomatic cables, purporting to be the dispatches of Sir Charles Dashwood, a British attaché in present-day Beijing, decrypted and translated by BJC senior editor RFH] 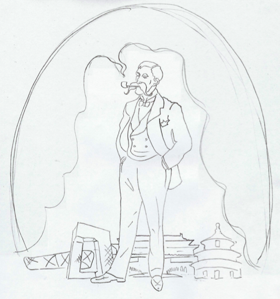 Bang! I’d only been in the Imperial Capital a few days and already my musk had attracted the bullets of an Oriental musket. Such was perfectly normal in the course of things – practically a royal duty to suffer indignity, if you will – but I’d been expressly informed by the ambassador in London, only a few weeks ago, what a marvellously modern and crime-free capital they were running here in China.

“It is not like some places,” sighed Mr Liu, delicately twitching his curtain overlooking Portland Place (prime real estate – he should be more grateful). Oh, I knew damned well what he was referring to: the demonstrations outside his embassy every other week, from “mosquitoes” like the Filipinos (his word, mind) to chanting reps from the Arab League, all bloody annoyed at Peking’s creed over the sanctity of internal government. I suspected he’d like to take the same approach as the Libyans did in ’84 – and what a damned stink that was.

“Nothing to be done,” I shrugged. “You try fitting a tank down a mews. Besides, the newspapers would have our guts for garters.”

I coolly examined my fingernails, letting the good Ambassador swallow the full import of my words, knowing full-well there was nothing further to be retorted. When it comes to humour, we Brits are acknowledged round the world for having bagloads of it; the Chinese – not so much. That’s not censorship, that’s market forces. Why, if Johnny China made a bellyacher of a sitcom or some comedy flick that wasn’t all slide-whistles and slapstick, we’d all watch! But Johnny China does no such thing, so Britannia rules the airwaves.

“Ah yes, your famous ‘free press.’ So many quality titles to choose from, all offering independent and thorough coverage of your ‘Leveson Inquiry‘… into media standards, is it not?”

“Now steady on…” I gamely sallied. We ping-ponged back and forth for a good while, good-naturedly of course, and by the end, I had his full blessing for my mission and assurances that I would meet no trouble from the authorities in Peking.

“What about the Manchus?” I suddenly remembered as I was leaving. “How can we be sure they won’t pull something?” I knew my history and had a devilish set of locks to boot: the last thing I wanted was having to pull it into a pigtail or face the chop. But all Liu did was perplexedly shut the front door on me. Typically inscrutable.

None of which gave me much confidence when the guns started firing back in Peking. I was riding down the street on Gunny (short for ‘Gunboat,’ my own nickname for the racy little two-wheeled electric number I’d picked up for just a few thousand taels on arrival; that’s chump change, really. My left shoelace costs more), but when the first shot let fly, I literally braked to the hilt, slammed the wheel right and dove straight into a nearby shrubbery, apparently built out of scrap metal.

I lay low, breathing hard and bleeding harder as the firefight continued outside. But as the minutes ticked by and my ears processed the sounds, I realized what a bloody fool I was. Those aren’t gunshots, Dashwood – they’re fireworks. As a top Sinologist, I knew that the Chinese had invented fireworks some 4,000 years ago and used them exclusively for playthings. When the Manchus made a move, their invading army was greeted by five gross of Ming roman candles. It took about as much time as an army took to walk over China to capture the entire country. God knows how they took Taiwan from the Dutch – must be because the Orange are a bunch of sex-obsessed, blonde ‘ganja’ smokers. Of course, I myself love smoking, blondes, and sex (not in that order), but try invading my island, chummy.

So I emerged from the hedge and was greeted by an ageing wise woman, accompanied by two small children. All three of them were staring at me with colourful boxes under their arms, all of the latter smoking. And sizzling. Before you could say ‘Ni hao,’ those boxes had gone off. Boom!

I won’t go into detail; suffice to say that both the woman and her consorts were totally blown to smithereens in the explosion. By the time the smoke and lights cleared ten minutes later, all that was left of them was an acre of shredded red tissue paper, leading me to wonder if it was all a dream or if I’d been attacked by a troupe of rogue shadow-puppeteers.

As for all that ‘no-crime’ nonsense, just the last few minutes had seen about 20 different guidelines for use of fireworks – issued by those jobsworths at the Beijing Health & Safety Executive – flouted right in front of my very moustache, the smoking ends of which bore singed witness to the crime.

This was technically an assault on British territory (not to mention that of the notable Storm Agency: I’ve ceded modelling rights to my image for the next five years in perpetuity, in exchange for a ton of silver), but wary of stirring up a diplomatic hornet’s nest this early in the day, I adjusted my britches and roared off on Gunny, bound for my hidey-hole at the British Embassy. What more cunning cloak for an English agent than to hide in plain sight?

But when I got there, they said I couldn’t stay. Luckily, there was room at the Lucky Dragon Hostel, a mere 30 minutes away by Gunny.

NEXT WEEK: Dashwood repairs to the hairdressers to treat his moustache and finds the Chinese have a new meaning for “blow and dry.” Our intrepid attaché begins to look into the credentials of a chap named Neil (a.k.a. Nick).