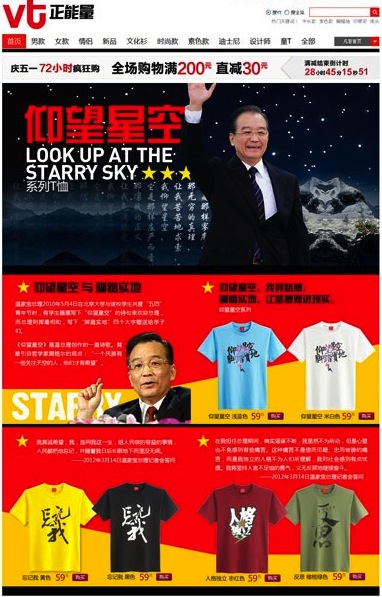 Via Ministry of Tofu, VANCL t-shirts (no longer available) with Wen Jiabao quotes.

Excited about the Strawberry and Midi festivals coming up? Don’t answer. I can’t hear you. Links.

Bo Xilai is in deep trouble if this is true. “Citing ‘nearly a dozen people with party ties’, it said the disgraced Mr Bo ran a wire-tapping network across Chongqing, where he was party chief. // His officials even listened to a phone call involving Hu Jintao, it said.” [BBC]

The eldest son of Bo Xilai speaks out. “’This incident has destroyed my life,’ said Li [Wangzhi], who also goes by the name Brendan Li. ‘I have no way to control how others think, but I have no desire to bask in his glow,’ he said, referring to his father.” [Bloomberg]

Now that we have William Hague’s voice on the record, we can continue living our lives. “Britain’s Foreign Secretary William Hague on Thursday took the unusual step of publicly insisting that a U.K. businessman who died in suspicious circumstances in China was not working as a British spy.” [Washington Post]

Corollary: “Wang Lijun, the former chief of police in Chongqing, told US officials that Gu Kailai had confessed that she was responsible for the killing with the words: ‘I did it.’” [The Telegraph]

You mean like this? “However, there are some truly bizarre oddities elsewhere among the nominations. The ‘Best Value’ category is dominated by outrageously expensive venues.” [Round-the-World Barstool Blues]

A follow-up to the “angry father” post. “Yesterday Yaxue posted a piece entitled ‘An Angry Father,’ in which she asked the question – How can a parent protect their child from the poison of the Party’s propaganda? Yaxue also mentioned the feeling of guilt and anger that she experienced as she told a friend not to interfere with the system for the sake of his child. These two ideas I think deserve closer examination.” [Tom, Seeing Red in China]

“Racism” in snooker. In other news… most exciting thing to happen to snooker in forever. “Allen was adamant Cao, who won 10-6, should have called a foul against himself during the opening frame of Sunday’s session when the Chinese was just 5-4 ahead. // He then risked further controversy by saying: ‘It seems to be a bit of a trait for the Chinese players because there’ve been instances in the past, of fouls and blatant cheating going on. It needs to be corrected.’” [Bangkok Post]

A story about another coffee seduction in Shanghai (where do these dupes come from?). [Shanghaiist]