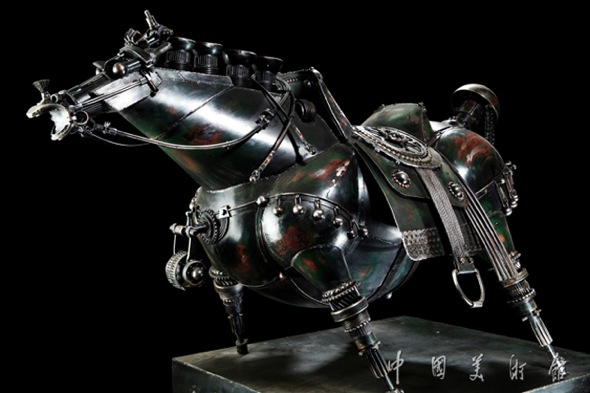 As to be expected from the invariably weird National Art Museum of China, the exhibition design for “Pneuma, Enlightenment, Harmonious: Sculpture Exhibition of Zhao Chengmin” was really freakin’ weird. First there were the dingy maroon walls — apart from the feeling of being in a ’70s smoking lounge, they wouldn’t be so bad except that everything in the exhibition was made out of reflective metal. Kind of changes the experience. What would be an immaculate, radiant sheen turns into a dumpy glimmer. It’s not an inspiring feeling. While boring, white walls are the standard for museums to avoid distractions like this.

Then, hanging on those walls were giant pictures of the artist and his studio megaplex near Badaling. I don’t think it’s necessary that we see both the night and day views of Zhao’s swimming pool. If Mark Rothko, curmudgeonly Ab Ex painter who spent the first three decades of his career playing jump rope with the poverty line, saw Zhao’s private library or nautical-themed reception room, his head would explode.

But onto the artwork: actually, not bad. If you’ve never been to the National Art Museum of China, you perhaps don’t understand how shocking the experience can be. NAMoC typically specializes in neo-realist paintings of swarthy, wizened minority men and pale, remarkably Han-looking minority women with perfect skin gaily frolicking and dancing in traditional festivities. Zhao’s work, however — supposedly his first solo exhibition in 35 years (where did the mansion come from, exactly?) — are massive constructions, such as our friend Turbo Pony up there. They are made of industrial items, nuts and bolts, wire rope, metal coils, tubes and plates welded together with varying degrees of finish. There are around 50 pieces spanning two decades.

There’s something very gleeful in their construction, a sense of joy evident from the artist that is very infectious. The horse and warrior sculptures make me wish for handheld versions so I can play with them while making sound effects with my mouth. There’s something to be said for that, and not just that I’m a man-child who could be the subject of a Lana Del Rey song. 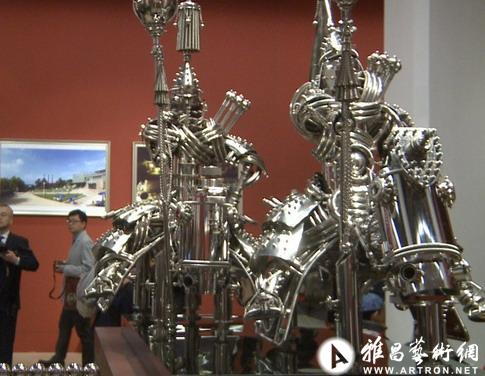 The smaller, less grandiloquent works complement these well. Whereas the big pieces are all bombast and emotion, the small pieces are contemplative. The chinoiserie shifts from fawning over politics and history to philosophy and nature. Some of them are even quite spiritual, and in an abstract way that avoids the pratfalls of being too literal. 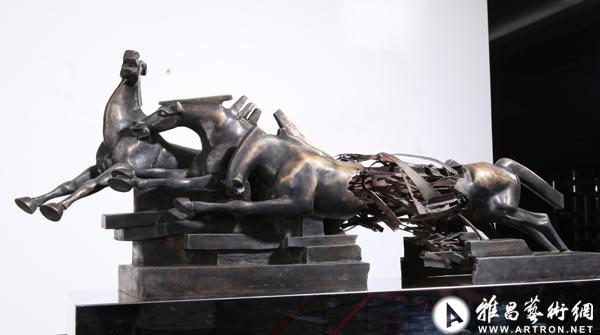 The style isn’t completely original, as you’ll soon see, but most of the pieces have flashes of technical inspiration that sustain your attention. Take the above piece, “A Group of Clouds Trample the Snow and Gallop Towards the Sky” (sounds much, much better in Chinese). Zhao abstracts the horses’ features to give them a sense of solidity and strength while simultaneously dissolving that structure in the center by breaking it down into attenuated strips and sinews. It evokes power alongside the intricate, fragile and unfathomably complex biological motor for that power. And it does this in a way that’s uplifting. These, too, are ultimately works of Triumph.

And that’s where it starts to get a bit uncomfortable. It’s pretty much cut-and-copy Futurism, the stuff of early-20th-century Italian artists who fetishized war and industrialization, rendering the power of nature in the language of steel, etc. There’s a reason that Zhao’s horses’ feet are shaped like gun barrels. Sure, thematically you have to substitute the course of Chinese politico-military-philosophical history for Italian nationalism during the Industrial Revolution, but there’s an uncanny amount of overlap. 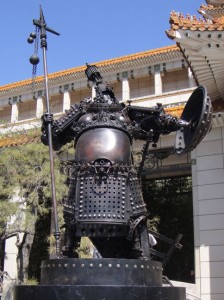 This hunch came to me even before I read Zhao’s preface to the exhibition, subtitled, “My Dream of a Strong Nation.” He extols, at length, his desire to see China rise up and triumph over America through the power of her art and aesthetic principles, something about qi and enlightenment and harmony that are incomprehensible to the Western mind.

Note to Chinese aestheticians (and dieticians, and doctors, and anyone inclined to hold such theories as legitimate counterpoint to the West): qi has not and cannot be shown to exist in any empirical way. It is not a thing. Remember when Mao advocated smashing superstitions? This is what he was talking about. It’s no coincidence the Wikipedia page on qi refers you to the page “Force (Star Wars).”

Mercifully, little to none of the exhibition has to do with qi, or harmony, or any of Zhao’s vague batshit themes. It is about Chinese history. Or, more accurately, a myth of Chinese glory and military triumph and spiritual attainment that gives nationalists the hardest of hard-ons. This is where the artworks start to lose a bit of their charm. The magnificence and affective power of some of the works are speaking a very different language to the intended audience, to which I, sadly, do not belong. This is an exhibition meant to inspire not reflection but feelings of a patriotic community, a sense of duty to a cultural lineage. It’s no wonder reviews of the exhibition all laud Zhao’s “sincere nationalism.” It just goes to show you art can be technically and aesthetically solid but have a rotten ethical core.

“Pneuma, Enlightenment, Harmonious: Sculpture Exhibition of Zhao Chengmin” will be on display at the National Art Museum of China until April 24. Go and feel the Pneuma.